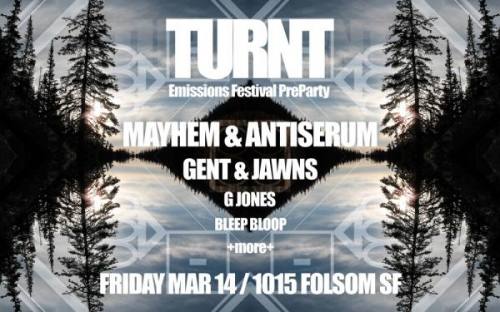 
As it gets closer to the festival date it’s time to release some of the excitement being built up. Join us for an over the top night of unmatched music. Last year this party was out of control, so this year it goes up!


*You will be able to purchase tickets to the ‘Emissions: West Coast Bass Culture Festival’ at this event*


The Emissions Festival is a celebration of the rich, creative culture surrounding the west coast’s bass music & festival community. It is a reflection of the appreciation felt for these experiences.


As a vanguard of forward thinking bass music, Antiserum continuously defines the sound of today. He has found himself continuously at the forefront of bass music’s list of key players. His ability to inoculate should come as no surprise. His production “Brick Squad Anthem,” a collaboration with Atlanta-based music producer Mayhem, has solidified him as an authority in hip-hop inspired electronic music. Antiserums BBC Radio 1xtra mix is a brief glance into the dynamic nature of his performance.


Chart topping, dance floor rocking, and taste making come naturally to Atlanta based DJ and Producer Mayhem. With over 15 years in the studio and the decks, he has garnished the attention of the heavyweights in every genre of his focus. Rooted heavily in Drum & Bass music, and with a


discerning ear, Mayhem found himself making big moves from an early age. He has warranted a reputation for diversity and quality control. No matter the genre, you are guaranteed a diverse set with attention to detail and a healthy respect for dynamics and balance.


After developing respectable solo careers as DJs and producers, long-time friends Billy the Gent and Long Jawns officially banded together as Gent & Jawns becoming an unstoppable force in the world of club music. In early 2012 they worked with mega-producer Diplo on his Express Yourself EP,


which topped the iTunes charts as the number one electronic album. They followed up with an absolutely stunning remix of the title track “Express Yourself,” which saw repeated plays by many of the top DJs in the world. The duo ended the year proper when they released “TURNUP”, a


party-inducing track that’s being called the biggest trap song of 2012. While known for their world-class production, Gent & Jawns’ secret weapon is their ability to perform live.
About | Advertise | Contact | FAQs | Terms of Use | Privacy Policy © 2020 - TheUntz.com. All rights reserved.