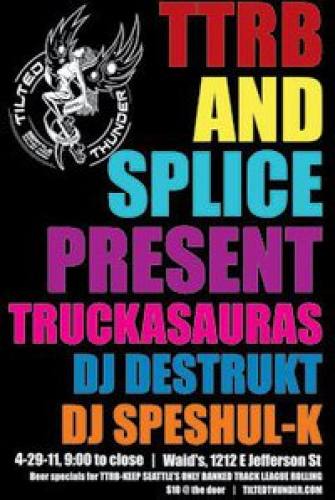 Come join the Tilted Thunder Rail Birds, Seattle's banked track roller derby league, and Splice DJs Destrukt and Speshul-K as we throw one hell of a party with our guests Truckasauras.

"Since Truckasauras' first performance, they have been repeatedly redefining electronic music in the live setting. From underground house parties, to impromptu street performances, to proper rock venues, Truckasauras' explosive lo-fi, audio-visual, live sets continually raise the bar for not just electronic music, but anyone seeking to captivate an audience and rock the party.

Bordon's live video mash-ups are composed from some of the worst entertainment American television has to offer (vintage WWF, monster truck rallies, infomercials, instructional videos, etc. ). In the same way that Kraftwerk rejected American Rock'n'Roll for an exaggerated caricature of German-ness, so does Truckasauras reject the overly cool and aloof hipster in preference for an exaggerated American persona, both earnest and self-loathing.

In their 2008 debut release, Tea Parties, Guns and Valor, they brought forth from the studio pristine renderings of their raucous live set - proving that their layered mix of analog synths, drum machines, and samples had as much depth and nuance as their bar tab (which is to say very, very, deep). Their showmanship is only outshined by their musicianship and savvy in composing and producing in the studio.

Now with the sophomore release of Quarters, released collaboratively from Seattle's Fourthcity and the New York based audio magazine, The Journal of Popular Noise, Truckasauras further elaborates on their unique blend of all things electro with 9 new tracks. Sweet synths in Fresh Blue; Dope Yellow give way to the Truck version of an epic feel good track in the titular Quarters. Throughout the record dark and heavy rhythms and melodies build and layer. With a van full of hand claps, cowbells, and rib rattling kick drums, Truckasauras proves once again that there is some really weird shit happening deep in the woods of the Pacific Northwest. - B. Kalet"
About | Advertise | Contact | FAQs | Terms of Use | Privacy Policy © 2020 - TheUntz.com. All rights reserved.