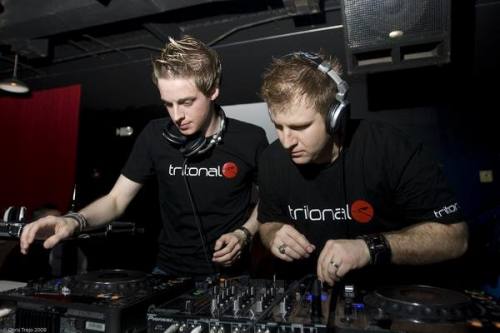 Tritonal consists of two DJ’s at the forefront of trance music production and live sets. Chad Cisneros and Dave Reed produce cutting edge performances that trigger your emotions to dance and rival the best in music today. In the studio, their extensive sessions are filled with boundless creativity and an unrivaled passion for producing new sounds an...d slamming tracks. The two met online while discussing sound design and production techniques. They quickly developed a relationship and came to realize that together they could achieve much greater things. At the time, Chad was busy in Austin, TX remixing for some of the world’s most prolific labels such as Armada, Lost Language, Baroque, AVA Recordings, Alter Ego, and Pangea. Dave, on the other hand, was busy in the D.C. area producing his own artist album. Recognizing that their sounds complemented one another perfectly, fusing driving progressive rhythms with emotional, uplifting trance elements, Dave decided to make a commitment and move 1,500 miles across the U.S. so that they could work together daily. Something special was emerging that was bigger than either had previously experienced. Within the first 6 months of working together, Tritonal had 15 originals and a handful of remixes under their belt. As of late, Tritonal has licensed tracks with the biggest labels in trance music, including Anjunabeats, Flashover, Armada, Lost Language, AVA, Coldharbour and many others. They are truly one of the most exciting duos in today’s trance music scene. Look for big things from these two guys in the years to come!