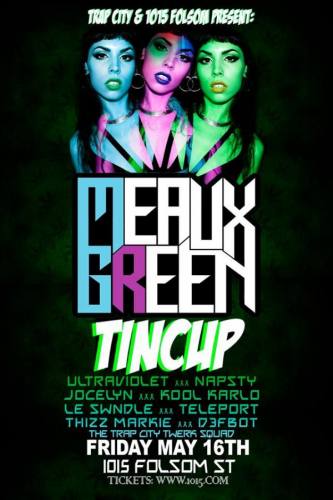 From sell out shows to viral releases Meaux Green’s presence in dance music over the past months have turned him into one of the most coveted players in Trap, House, Bass, beyond and he works endlessly to secure a sound unlike anything before. Using his Hip-Hop background as inspiration, and fusing in today's modern dance sound, the Miami native now finds himself as one the leaders of the 100-bpm bass music sound. Building a name through multiple residencies and Southeastern shows, he has also become one of the fiercest DJs playing versatile sets and quickly becoming a crowd favorite.

His originals however are what pull the plays, the features and the largest widespread support. With nods from industry legends Moby and Boys Noize from the beginning, he’s been commissioned on Henry Fong’s records, and had his free releases picked up by the likes of ThisSongSlaps, EDM.com, Trap And Bass and dozens more. A regular on the mix shows of Brillz, BBC Radio 1, and Diplo & Friends, his work has gained the consistent support of industry greats like Craze, Diplo, DJ Snake, Dillon Francis, Flosstradamus, Bro Safari, UZ, Doctor P, TWRK and many others. In fact, Billboard.com recently aired Meaux Green as the “Next Big Sound” of 2013

Collaborating with the industry’s most respected, his works have also landed him features on a handful of official record releases. His collaboration “Thirsty” with CAKED UP for example hits Mad Decent running, as one of the heaviest and biggest supported tracks of 2014 and has already amassed over 2 million plays. Other collaborations with Tropkillaz, Party Favor, D!RTY AUD!O and more have set the bar high within his niche.

Sprinting into 2014, Meaux Green has packed his bags and is flying across North America on what is turning into a endless string of show dates. Plus, with massive collaborations underway and a collection of originals aimed at dance’s best labels, Meaux Green is halfway to the main stage and has his lifetime fans right behind him.

Tincup stands as both a rising star and a driving force in the EDM and Trap worlds. With a clever blend of jazz, hip-hop, dubstep and trap, Tincup's many inspirations allow him to seamlessly create from genre to genre without losing his subtle, yet signature sound. Music creation started for Tincup at age 9, when he took a simple keyboard and began re-programming the drums presets that came with the keyboard to a sound more to his liking. After playing drums in 6th grade, his music curiosities lead him to study other instruments before making the full plunge into music production by studying and using Apple Logic. His first productions were very hip-hop based but after listening to Rusko, he transitioned to EDM and has not looked back since. In just a year, Tincup has been ranked #7 on Billboard's Next Big Sound December 5, 2013 chart and has racked up over 1.2 million plays on Soundcloud. In 2014, Tincup has already released 2 big records: "Critics", which gained over 25,000 plays in the 1st day of release and "Gucci Jacuzzi" featuring RiFF RAFF, Crichy Crich, Yung Elvis and multi-platinum rapper Lil Flip. With a number of shows planned across the U.S., the best for Tincup is yet to come.
About | Advertise | Contact | FAQs | Terms of Use | Privacy Policy © 2020 - TheUntz.com. All rights reserved.