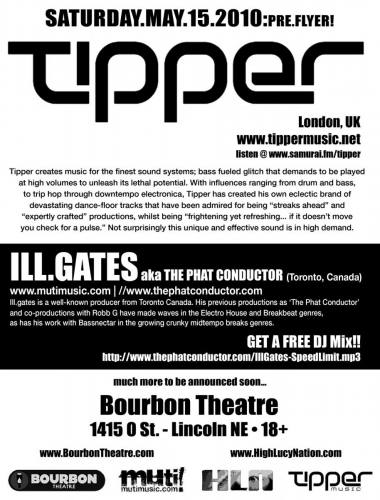 :: Saturday May 15th, 2010 ::
HLN Productions is proud to present...
TIPPER - London, UK
http://www.tippermusic.net
Listen to mixes @ http://www.samurai.fm/tipper
Tipper creates music for the finest sound systems; bass fueled glitch that demands to be played at high volumes to unleash it's lethal potential. With influences ranging from drum and bass, to trip hop through downtempo electronica, Tipper has created his own eclectic brand of devastating dance-floor tracks that have been admired for being “streaks ahead” and “expertly crafted” productions, whilst being “frightening yet refreshing...if it doesn’t move you check for a pulse.” Not surprisingly this unique and effective sound is in high demand.
In addition to releasing his new downtempo album "Broken Soul Jamboree" during the Spring/Summer, 2010 sees Tipper return to touring and performing with increasing frequency. Having recently completed the musical score for a Canadian film documentary, and with another surround sound project in the pipeline (fitted somehow around a hectic series of US tour dates) fans everywhere are pleased that Tipper is back to his busy best.
ILL.GATES aka THE PHAT CONDUCTOR - Toronto, Canada
http://www.mutimusic.com | http://www.thephatconductor.com
DJ Mixes:
http://glitchhopforum.com/glitch-hop-mix/ill-gates-live-edmonton-min-mix-jungoroad-com-t1505.html
http://www.thephatconductor.com/IllGates-SpeedLimit.mp3
Ill.gates is a well-known producer from Toronto Canada. His previous productions as ‘The Phat Conductor’ and co-productions with Robb G have made waves in the Electro House and Breakbeat genres, as has his work with Bassnectar in the growing crunky midtempo breaks genres.
Past production work includes remixing the likes of DJ Dan, Myagi and Si Begg and has led to top selling tracks on Beatport and also a mention in URB as one of their ‘next 100′ top artists. His versatility
is evident in his broad array of collaborations with reknowned producers like Robb G, Bassnectar, Meesha, Little John, Friction, Malaya, Stephane Vera and Canadian Hip Hop vocalist Masia One.
‘Autopirate’, covers a broad range of genres and confirms ‘ill.gates’ production values.
much more to be announced...
Bourbon Theatre
1415 O. St.
Lincoln, NE
18+
http://www.HighLucyNation.com
http://www.BourbonTheatre.com