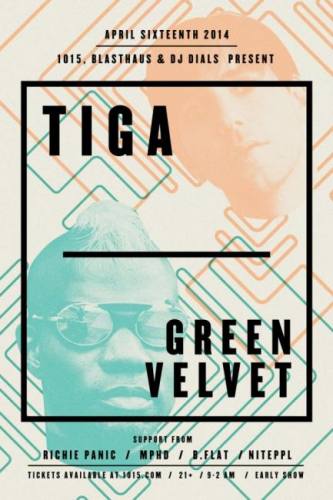 
The origins of Montreal born DJ-producer-incipient Teutonic legend Tiga lie to the vague and troubling East, where he was weaned on the nefarious milk of the notorious 1980s Indian club scene.“To the unforgiving eye,” he says of the sybaritic night-kingdom,“a world of filth and decadence is revealed. For example, I’m fairly certain that more than a few club owners had an unsavory arrangement with the man who brought the folding chairs. I was at once appalled and enraptured. After that, I had no choice in the matter.”


In 1990 Tiga and a few friends started throwing small parties and street promotions in Montreal that evolved into a cult following. Having bought DNA records in 1994, the nightclub SONA was then conceived in Montreal in 1996, with Tiga having a major role to play in the creation of the dance scene at the time. A few years later in 1998, Tiga founded Turbo Recordings, which went onto release records such as Peter Benisch’s “Soundtrack Saga,” Christopher Handlebar’s “To a Time of Asia” along with Tiga’s own “Mixed Emotions” and “American Gigolo”. The recording studio secured global distribution with Prime, Intergroove and Caroline.


In 2001, Tiga entered the studio with producer Zyntherius to record a rendition of Corey Hart's solo song, “Sunglasses at Night.” The track also made it to number two on the UK Dance Chart, number 23 on the UK National Singles Chart and held down number one on the MTV Dance Chart for over six weeks. Between 2001 and 2005, Tiga completed remixes for the likes of Martini Bros, Alipinestars, Telepopmusik, Felix da Housecat, Fischerspooner, r Depeche Mode, The Vests, Moby, LCD Soundsystem and many more. During this stint, he commanded the most attention attention of the scene with a mix CD for K7’s legendary DJ Kicks series, followed by the release of Tiga’s version of Nelly’s “Hot in Herre,” which was licensed in the UK by Skint and Warner Music Germany.


2006 marked the release of Tiga's debut album, Sexor, which won the 2007 Juno Award for Dance Recording of the Year and he quickly followed the success of the album with the hit "Mind Dimension" in December 2008. And after the huge successes of his iconic debut and enormous single, the release of Tiga's second album, Ciao! took place in 2009. Collaborators included serious heavy hitters the likes of Soulwax, Jesper Dahlbäck, Jori Hulkkonen and Jake Shears, as well as James Murphy of LCD Soundsystem, and Chilly Gonzales. And most recently in November 2012, Tiga released his first single in 6 years, Plush on Different Recordings, which was then remixed by Ame, Jacques Lu Cont and Sinichi Osawa. He also compiled a mix CD called Tiga Non Stop, which features songs by Duke Dumont, Jacques Greene and Locked Groove.


Since 2006 there are few DJs or producers that have remained as prolific as Tiga, as he has remained incredibly active on the tour scene, performing more than 300 concerts from then until now and creating hits along the way.


Change has been a constant theme throughout the successful career of Green Velvet, but as he has crossed genres, explored themes from the comedic to the serious and changed monikers, the common thread running through the music he has made for nearly two decades is its roots in and dedication to the Chicago House sound. His first transformation came when he left master’s degree studies in chemical engineering at UC-Berkeley to turn a hobby into a career making music, influenced by the sounds he had been exposed to as a science-fiction-loving, video-game-playing kid whose father was a part-time Chicago DJ. As Cajmere, he released his inaugural Underground Goodies EP in 1991 on his Cajual label, keeping true to the early House sound. He quickly followed it up the next year with the smash hit “Coffeepot (It’s Time for the Percolator).”


The next 17 years witnessed an incredible array of electronic music emanating from this prolific artist, as well as a second label under his direction, Relief. Adopting the persona Green Velvet (not to mention a Day-Glo shock wig) for his techno-oriented pieces and DJ appearances, he became the champion of new wave Chicago beats through the ’90s-known best for hits such as “Preacher Man,” “Flash” (a No. 1 U.S. dance hit in 1995), and 1997's laugh-inducing “Answering Machine.”


The decade ended with his first album, Constant Chaos in 1999. The new century brought a compilation album, Green Velvet, during a brief signing with Warner Bros. Records’ short-lived F-111 imprint, and a production album, Whatever, on Relief. The punk-inspired Whatever explored darker themes than his previous work, including racism (“When?”), drug use (“Genedefekt” and “La La Land”), alienation (“Sleepwalking”) and bending to authority (“Gat”). “La La Land” went on to become by far the biggest selling track of his career. His live act expanded as he began playing a keytar, with two other musicians-Nazuk and Spaceboy-backing him, playing heavily distorted synths.


The last decade has seen Green Velvet become a fan favorite across the world, playing to huge crowds at festivals in addition to live radio appearances and club gigs. Numerous side projects and remixes under various names also added to his seemingly nonstop musical output. In 2005, Green Velvet released his third album, Walk In Love, which stayed true to the House sound, with a few pop- and punk-oriented tracks for good measure, including “Come Back” and “Pin-Up Girl,” both of which featured a live guitarist.
About | Advertise | Contact | FAQs | Terms of Use | Privacy Policy © 2020 - TheUntz.com. All rights reserved.