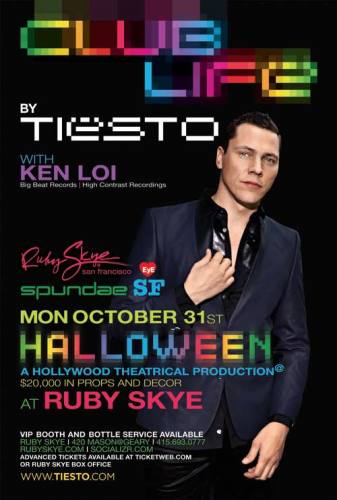 
Whether it be the 250,000 revelers coming together at Ipanema Beach in Rio De Janeiro, the adoring clubbers who descend upon Privilege in Ibiza on a Monday night every summer, or the 25,000 fans en masse at Victoria Park in London, all are in attendance for the same reason: they have come to see Tiësto, the world’s biggest DJ/Producer!


Tiësto, a.k.a. Tijs Verwest, is a performer who has transcended musical genres to create a global ‘Tiësto’ brand. His achievements include a Grammy nomination, numerous MTV awards, performing at the opening ceremony of the 2004 Athens Olympic Games, and even a wax statue at Madame Tussauds. With over 7 million followers on Facebook and over 130 million hits on YouTube, Tiësto has truly become a universal phenomenon.


Recently voted ‘The Greatest DJ Of All Time’ in a Mixmag poll, Tiësto has worked with artists as diverse as Nelly Furtado, Yeah Yeah Yeahs, Goldfrapp, Jónsi from Sigur Rós, Diplo, and Busta Ryhmes. When he is not collaborating with some of the world’s most respected artists he is jet setting his way around the globe playing sold out shows to his adoring fans. His recently completed Kaleidoscope World Tour spanned more than 15 months and 175 dates across 6 continents playing to over 1,000,000 people. The hugely successful tour was recognized as such when Tiësto was nominated for two 2010 Billboard Touring Awards and listed in Billboard’s Top 25 biggest grossing touring acts of 2010. Never one to rest on his laurels, Tiësto is more enthusiastic than ever for the new and improved 2011 live experience. The 2011 ‘CLUB LIFE TOUR’ and ‘TIËSTO LIVE IN CONCERT’ shows in Vegas will continue to evolve and expand what a live DJ show can be. “For me the possibilities are limitless and I have once again been working with a really talented team on state of the art production elements. I am really pleased with the results and I can’t wait for the fans to experience these incredible new shows!”


Tiësto has also been hard at work in the studio fine-tuning ‘CLUB LIFE - Volume One Las Vegas’ his new mix album released in April 2011. This is the first in a brand new ‘CLUB LIFE’ series that replaces ‘In Search of Sunrise’, one of the most successful DJ mix compilation series of all time. Released through Tiësto’s own Musical Freedom record label, the album features 15 of the hottest new tracks and remixes from the best in dance music all mixed seamlessly by Tiësto. Artists such as Kaskade, Diplo, Hardwell, Henrik B, Moguai, Dúné, and Marcel Woods all make an appearance along with remixes from Sultan and Ned Shepard, Angger Dimas, Alesso, Thomas Gold, and Tiësto himself. “I wanted a fresh new series to reflect my new style which has been evolving in the clubs for the past few years. It fees great to launch my own series on my new label” says Tiësto. Musically Tiësto has been experimenting more than ever before. “You would be surprised to hear what is on my personal playlist. I like all kinds of music and as I continue to develop as an artist I do not feel I should be confined to any one sound or expected genre. I draw influences from various sources whether it be movies, the people I meet, and of course all the amazing places I have been lucky enough to visit. This is definitely one of the best things about being a DJ.”


We can only imagine what he has in store for 2012 and beyond. Watch this space!