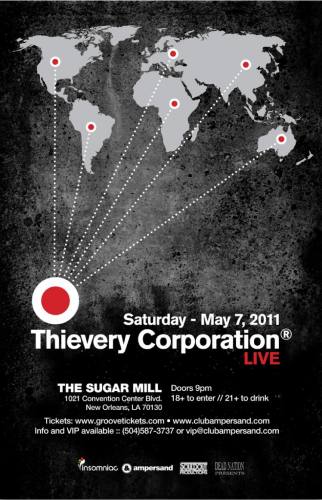 What: Thievery Corporation @ The Sugar Mill


In 1996 Thievery Corporation released Sounds from the Thievery Hi-Fi; an album that defined an entire genre of music and crystallized their distinct “outernational sound” aesthetic. Over the next 14 years the duo would write and record four more critically acclaimed studio albums (The Mirror Conspiracy, The Richest Man in Babylon, The Cosmic Game, and Radio Retaliation), three remix albums (Abductions and Reconstructions, Babylon Rewound, and Versions), and various DJ mixes and film soundtracks (The Outernational Sound, and the recent Babylon Central Film Soundtrack).

From the beginning, it's been remarkable to witness the growth of Thievery Corporation's fan base as it's steadily grown in such a DIY, organic fashion since the duo's first LP. "We were so inspired by Washington, DC's Dischord and the true do-it-yourself ethos of the DC punk scene that Rob and I both grew up on. A lot of great music reaches fans without the typical hype and fanfare enjoyed by bands on the majors. Music eventually finds its audience through a myriad of alternative routes. And when that connection is made, that bond is strong," says Hilton.

Certainly that bond is so remarkably strong, that Thievery Corporation has been able to sell out the famed Hollywood Bowl, London's Shepard's Bush Empire, the Theatro Vrahon Melina Merkouri in Athens, Greece, and countless other legendary venues around the globe. Spreading their unique sound far and wide, Garza and Hilton were always great admirers and curators of dusty grooves and all but forgotten music styles. They borrow from the classically sensual and blunted sounds of their favorite Brazilian bossa nova, Jamaican dub reggae, vintage film soundtracks, Afrobeat, Latin and psychedelic rock to forge into new sonic territory.

"As we are in the midst of recording our sixth studio album this year, it just seemed like the time was right to release this collection. It's been a great journey - musically and personally - and we just wanted to have that one definitive document. It Takes a Thief is it, " explains Garza. "We feel like it's a great look back for some; and, for others, an excellent introduction to our sound."