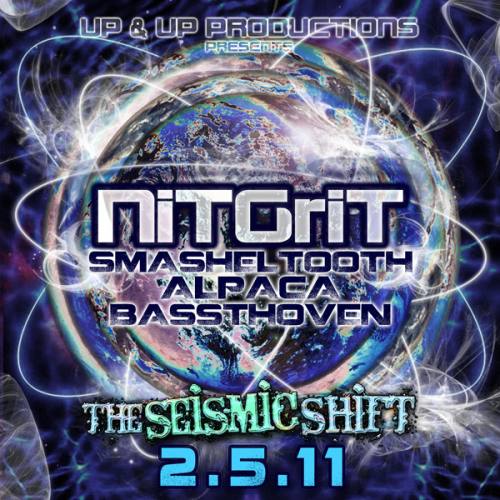 Promoters: Up & Up Productions

Seismic Shift Monthly has been goin strong for a hot minute now and we have decided to step it up a few notches for #6. This is gonna be a blowout! We are gonna take the midwest to places it has never been. It would mean so much if you would join us on this journey.

To assist us along our travels to the outer levels of spaced out psychedelic crunk is the mystery man of sonic mayhem......

NiT GriT is the devious machination of 24 year old San Jose, California native, Danny Beall. A relative newcomer to the scene, Dan has rapidly gained a substantial following in the recent months since the inception of this project. Influenced by genres such as IDM, D&B, Glitch, and Breakcore, Dan has spent the past 4 years producing and experimenting under several different monikers. His latest undertaking dissects elements from dubstep, glitch, and grime, and cauterizes them together in the most visceral and precise manner possible.

This man has quickly exploded on to the scene with much velocity. By letting his music and live performances do the talking for him he has captured the ears of listeners across the globe including the bloggers and other taste makers. Just in the last couple of months when he released his burning man preview mix

to the reports of his show that followed...the word spread like wildfire to the rest of the electronic music community that Nit Grit was a force to be reckoned with. Since then he has continued to put out song after song that continue to impress via Soundcloud

or through his releases on his bandcamp

and his affiliations with Audible Assault // Simplify Recordings

Also...here is the man known as DJ SHADOW opening his 2010 tour with a NiT GriT remix! If there is anyone that knows anything about electronic music then you understand that this is a kinda like a BIG DEAL!

We also have a great line up of co-pilots to handle the controls as we navigate the wobble and lazers.

There once was a dreamy-eyed lass and only punk rock and hardcore could make her shake her ass. One day she was walking around the block when she heard a boombox play hip hop. She started dancing and yelling YAAAAY but fell over and landed in a pile of dancehall-reggae. Reggae covered her eyes and face when she meandered into a basement playing drum and bass. This music made her dance and shake her back until she thought she'd have a heart attack. Then an unknown mysteriously deep bass sound led her into a secret room where dubstep was abound. Deciding she'd already fallen in love with enough musics in this one day, she finally went home and had dreams of getting thizz faced and riding the whip with Mac Dre. Smasheltooth rose to infamy status for getting her plug pulled at a Raindance festival for being too hard for the fucking soundboy.

The 2 man wrecking of crew of Blac and Bentone are known as BASSthoven. With multiple years of behind the decks and stages shared with some of the biggest names in the game to playing weeklys, packing parties, rocking festivals or honing their skills in the lab..... A provocative blend of deep dubstep, wompy glitch hop, and banging electro. BASSthoven is always live improv DJing to the next level: On the fly sampling & mixing centered around BASS.