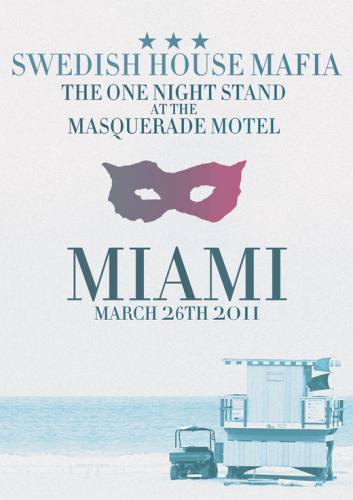 What: The One Night Stand At The Masquerade Motel Feat Swedish House Mafia

Read all about it on http://www.swedishhousemafia.com/.

2010 has been an incredible breakthrough year for Swedish House Mafia; they have sold a million singles, achieved an Itunes Number 1 with the album ‘Until One’ and saw their UK Tour sell out in minutes (including a second date at Alexandra Palace).

March saw the boys debut their new stage show at Miami’s Ultra Festival, the crossover smash ‘One’ was unveiled for the first time and Florence and the Machine came along for the ride.

The Summer launch and subsequent 16 week run of the ‘Masquerade Motel’ at Pacha led to two USA dates for Halloween weekend which set new precedents; the boys took over a custom made, built for the occasion, Arena in Miami and debuted their genre defining electronic music at The Joint in Las Vegas. The concept had now hit another level.

And now for 2011… Swedish House Mafia are pleased to announce, they will be returning to Miami for a unique concert, ‘The One Night Stand at The Masquerade Motel’ on March 26th 2011. Housed in a customised Arena, the ten hour extravaganza will be bursting with a fantastic light show, special guests and, of course, the boys’ exclusive performance.

Expect all the drama of the ’Masquerade Motel’ where you check in and be whoever you want to be behind closed doors. Just let Swedish House Mafia take care of everything.......MASKS ON PLEASE.

Tickets go on sale Dec 21st 2010 and other acts will be announced throughout December and January. So, join Swedish House Mafia as they take Miami into their own hands and treat you to their best show yet.