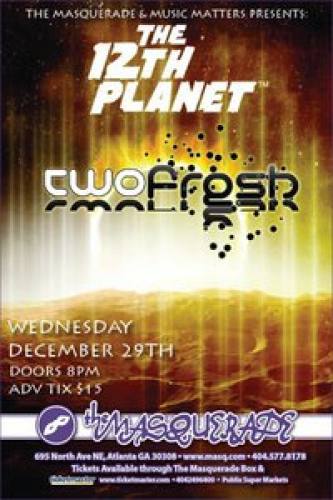 What: The Masquerade and Music Matters Presents:The 12th Planet and Two Fresh

John started over from scratch. After seven years touring the world as drum-n-bass maestro Infiltrata, after winning over icons such as Goldie and Photek, John Dadzie gave himself a new name, a new sound, and a new determination. It was 2005 and the gentile beatmaker was inspired by sounds he heard spun by the likes Technical Itch, Skream and Benga. It was dubstep. And it was his calling. Once 12th Planet is born, the story real...ly begins. The British dubstep movement takes hold in LA thanks to 12th Planet and the events he aligns himself with; Smog, Media Contender, HARD, and his own club night Dubtroit. Like the mythological twelfth planet (popularized by controversial author Zecharia Sitchin), our 12th Planet flies perpendicular to the system. His wicked beats are off axis. His subsonic frequencies surround you in their own orbit. America's first king of dubstep is ready for impact.