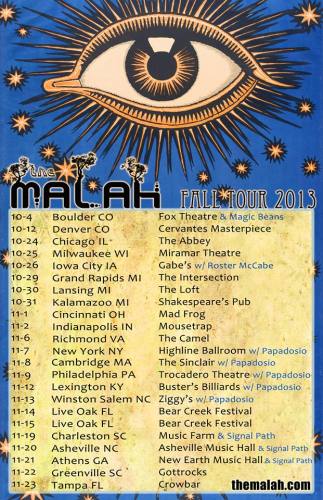 With two studio albums now under their belt and a third in the works, the band has arrived at their most mature and polished sound to date. Their latest live release, Live From Earth 2010 compilation, features new and unreleased material including very special guest performances from Mike Rempel (Lotus) and Dominic Lalli (Big Gigantic), along with remastered versions of fan favorites & a free download of the track "High Hopes". Live from Earth, catalogs what was a huge year for the band as they spread their uplifting grooves across the country. Now hard at work in the studio, the trio is putting finishing touches on their highly anticipated third album set to be released in 2012.

Signal Path began in the mountains of Missoula, MT in 2001 where they forged a unique brand of electronic dance music by splicing technology with raw instrumentalism. Now thriving in one of the most explosive electronic scenes in the country, the Denver based band creates powerful studio work and wildly popular live shows. Playing to packed crowds throughout the US, Signal Path's unique live experience is as beautiful as it is intense as they bend guitars, basses, drums, mandolins, and the bajo quinto around a core of unrelenting rhythm and massive low end production.

After releasing five albums of entirely original music between 2010 - 2011 including a full length entitled Imaginary Lines in Sept of 2010, and then releasing a new EP on the first day of each new season throughout 2011, this prolific band is about to release a studio project unlike anything they've ever done.

With this new studio release, Signal Path has taken some of their favorite current artists and sliced, diced, and turned them into a musical collage unlike anything they've done before. From the unlikely, yet emotionally deep Zola Jesus/Skrillex mashup to the instant banger, Swerve, featuring Shabazz Palaces, this new mixtaEP is pure ear candy for not only hardcore SP fans but fans of electronic, hip hop, and indie music as a whole!

Signal Path | mixtaEP will be released April 21st FREE through their website www.signalpathmusic.com

ALL of signal Path's music is made available with love and without charge through http://www.signalpathmusic.com/