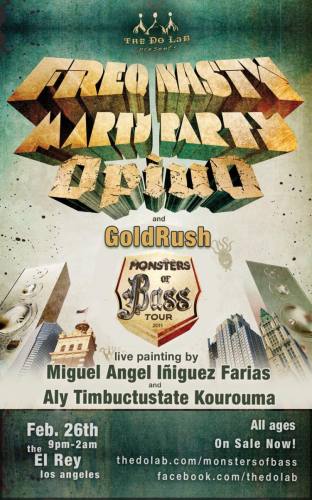 What: The Do LaB presents the Monsters of Bass tour

When the Monsters of Bass tour comes to Los Angeles, there's only one crew that can bring together all the bass-heads and sub-freaks for a night of over-the-top music, art and dancing, and that's The Do LaB. FreQ Nasty, MartyParty, Opiuo and GoldRush will be blessing the sound system all night long! Along with live art and several hundred of LA's wildest beat addicts dancing the night away, this will be a night not to miss.

Born in Fiji, raised in New Zealand and formed musically in the dance music revolution of London in the 90’s, FreQ Nasty now splits his time between Los Angeles and London. His music strives to bridge the gaps between the most current sounds in bass culture. FreQ rumbles with underground thunder in a staggering showcase of some of the rawest bass led beats around.

Born and raised in South Africa, MartyParty found his way to San Francisco 15 years ago as a software programmer. After discovering the music of the west coast and wanting to “Africanize” it, Marty began to learn the art of music production. Song writing has always been Marty’s passion instead of the typical beat style dj production. The music is a hybrid of electronic music and hip hop that together forms a totally new flavor of urban beat with the pretty hypnotic elements of electronic music and hard-hitting bass.

Opiuo is a producer / electronic musician based in Melbourne, Australia. His unique blend of highly original, extremely funky, futuristic, hoppo hop, and glitchy beats has quickly built him a strong international reputation.

GoldRush, absorbed in the current resonant energies and profound experience of dancing to/through/within/above/beyond bass heavy music, is on a humble quest to create and deliver music that inspires Romanticism through Dubstep influenced composition.

- - Lightning in a Paintcan Featured Artists - -

Miguel Angel Iñiguez Farias is a sketcher, painter, sculptor, and performance artist hailing from Tijuana, Mexico. Along with almost a dozen solo exhibits, he is also a professor of graphics and etching at UIA in Tijuana.

In his own words: I’m an artist from Tijuana México currently living in México city, and my work is influenced by a socialist ideal, painting murals and canvas with social themes and people that most of society would want to ignore. I would consider my contents an inclination towards bringing our inner humbleness and sensibility.

This event is ALL AGES

Tickets are on sale for $20