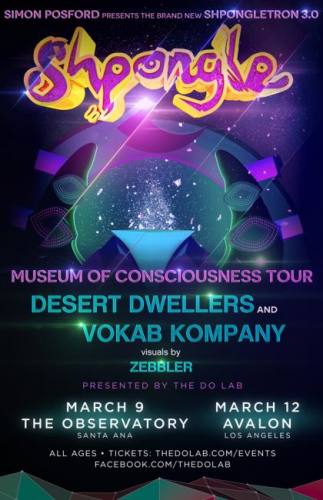 What: The Do LaB presents Shpongle, Desert Dwellers, and Vokab Company


Join us on March 9th as we host Shpongle’s Museum of Consciousness tour featuring a brand new Shpongletron 3.0 at the Observatory in Santa Ana. The event also features special guests Desert Dwellers and Vokab Kompany and visuals by Zebbler.


Shpongle (pronounced /ˈʃpɒŋɡəl/) is a psychedelic downtempo or Psybient music project. The members are Simon Posford (aka Hallucinogen) and Raja Ram (one third of The Infinity Project). Simon takes care of the production, instrumentation and programming, while Raja Ram is the flautist and Cunning Linguist. They DJ separately and together, Simon having just completed 52 shows in the USA touring with a visual extravaganza known as 'The Shpongletron'.


Dongle and Mongle are the only two other words rhyming with Shpongle...a strange hybrid of electronic manipulation and shamanic midgets with frozen digits squeezing the envelope and crawling through the doors of perception, find a new pair of dice...extra numbers and colours an infinite expanding bubble, filled with a bizzare, strange world of dripping hallucinatory wallpaper, a garden of earthly delights...........Shpongleland.....a place of well being, and reflective surfaces, morphing like an anacondas skin and shimmering like a million colour changing squid, at fifty fathoms.. truly unfathomable like seperating water from it's wetness, the Ineffable Mysteries unweave .....


Desert Dwellers consists of Amani Friend and Treavor Moontribe; together they are one of the most pioneering and prolific downtempo artists hailing from the United States, having released over a dozen full length albums, several DD remixed albums, as well as countless singles, EPs and remixes for labels like Twisted, Black Swan, White Swan, Six Degrees, and Iboga to name a few. After the huge success of the “DownTemple Dub” series, and blowing up the past three years at some of the most prominent international music festivals including Lightning In A Bottle, Symbiosis, Wanderlust, Shambhala, Eclipse Festival Australia, Envision, Beloved, Sonic Bloom, and Earthdance, Desert Dwellers are gearing up for a very big year in 2014, beginning with a 7 week tour across the United States opening for world renowned Twisted Records artist Shpongle!


Vokab Kompany are two MC/singers from San Diego, backed by their 4 piece band of awesome. Their live show combines multiple synths/keys with bass/drums and a violin to create a sound that doesn't quite adhere to a specific genre, but seems to fit the bill with several. The band interprets Vk albums (which feature production from a multitude of universally acclaimed producers, such as; members of pop rock sensation Cage the Elephant, DubStep Phenom Stephan Jacobs, Hip Hop legends Hieroglyphics, downtempo legend Random Rab and the list continues across the spectrum of Electronic/pop and hip hop genres. Their new album, VKCE, a collaboration effort with up and coming production/ musician duo Crush Effect (featuring members of Funk/Jamband legend Karl Denson's TIny Universe) on "VKCE" filling a void at the intersection of the hip-hop and EDM worlds. ‘VKCE’ is Hip-hop, it’s electronic, it’s indie - it’s a shout out to the past, and a taste of the future. Vokab Kompany’s Matt Burke describes the experience: “As musicians, it’s an ever evolving world; genres are a thing of the past, so we (VK) were really lucky to have teamed up with producers that pushed the boundaries of our boxes. We got outside our comfort zone, stamped a VK next to CE, and the result was something new entirely.”


This event is All Ages


We'll see you on the dance floor soon SANTA ANA!