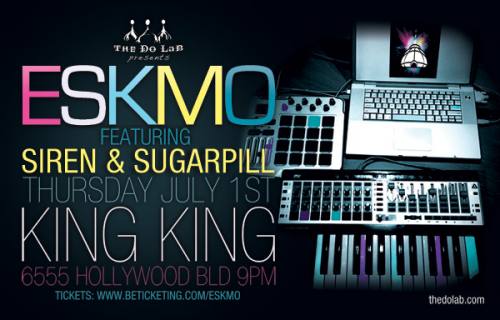 What: The Do LaB presents ESKMO

We here at The Do LaB love good music! And we also love bringing good people out to a night full of good music! So it's easy for us to be proud to present ESKMO on Thursday, July 1st at the King King in Hollywood! Also featuring performances by Siren and Sugarpill! Join us for another great night of good music and good people!
To purchase advanced tickets visit: http://beticketing.com/ESKMO
-- The Line Up --
* ESKMO *
Brendan Angelides is a San Francisco based electronic music producer who records and performs live as ESKMO. His multi-genre compositions have been featured on influential labels like Warp Records and Planet Mu. While Angelides' tracks encompass a wide range of electronic styles, he avoids classifications. Bleep.com described his tracks as "Masterfully produced... sophisticated, post-Dilla hip-hop funk". His last single of 2009 entitled "Let Them Sing" on Mu was met with equal praise and described by sites like Boomkat as "[Putting] ESKMO on his own electronic plateau."
ESKMO's music is stimulating without being overbearing. His tracks offer a vibrant rush of sound and quiet nuances often in the same track. XLR8R describes his work as “science-fiction like..spine tingling stuff.” It’s music that is both exciting and transformative. “I want to bring that out for people, and whatever that might activate for them. If someone is in a transitional phase, going through life difficulties or in a raw space, I want to direct [that energy] to a [more] productive space.”
In the past five years he’s released over a dozen singles and EPs while touring throughout North America and Europe. Although club and radio DJs readily spin his music, Angelides always performs his Eskmo and Welder work live. His innovative, emotive on-stage performances utilize Ableton Live software with various MIDI controllers to manipulate keyboard work, effects, warping and queing.
http://www.eskmo.com/
* SIREN *
Live drums, heavy synths, groove and energy are the foundation that Brandan Hale AKA Siren builds on. Hailing from Oregon and now settled in San Francisco, Siren is another new west coast find that has been making his distinctive mark on midtempo breakbeats and dubstep. With a background of metal influences and playing piano, saxaphone, drums in punk, ska and metal bands, Siren brings both melody and unforgiving edge to his productions.
A mixture of everything that has come to define the Siren Sound, pure energy, and a true love for music and the human experience with it: London Grime/Dubstep, West Coast Mid tempo, Miami Booty, Classical, metal, and anything else that carries the weight and touch to caress the subs and tweeters.
http://www.myspace.com/sirenheat
* SUGARPILL *
Specializing in bouncing bass, sideways beats and experiments of noise, Sugarpill is a master of both the creation and delivery of polytemponic glitch. Residing in Los Angeles yet living in a twisted world of sound, this young artist stays dosed to the eyelids in chopped-up samples, meticulously tweaked beats and obese waves of bass. Sugarpill seamlessly merges his techy sensibility and immaculate production skills without ever losing the inherent sexiness of the beats, and this multidimensional musical approach unites EDM fans across a vast spectrum of genres and tempos. His original tracks combined with explosive live DJ sets confirm for the producer a powerful spot at the forefront of West Coast future sound. Crossing genres effortlessly and employing a rich variety of styles, his lively and intense sound is best described as a party- and that is exactly what Sugarpill brings to the dance floor.
http://sugarpillmusic.com/
-- This show is presented by The Do LaB --
Based in Downtown Los Angeles, The Do LaB is an ensemble cast of creatives ranging from artists, event producers, lighting designers, DJs, constructors, welders, costumers, musicians, and the performance troupe Lucent Dossier.
Since 2000, The Do LaB has been dedicated to treating experience itself as the art form. Their exceptional annual events–including the Lighting in a Bottle Music Festival–and jaw-dropping, large-scale art environments, have been attracting a devoted following among the West Coast’s underground creative community, and around the world. While bringing the visions of their home-grown art collective to life, The Do LaB has evolved into a respected event creations company, winning over major brands, music festivals, and trade-shows, with their unparalleled creativity and innovation.
http://thedolab.com/
http://www.facebook.com/thedolab
http://www.twitter.com/thedolab
-- Show details --
To purchase advanced tickets visit: http://beticketing.com/ESKMO
Venue:
King King
6555 Hollywood Boulevard
Los Angeles, CA 90028
*This event is 21+
See you on the dancefloor!