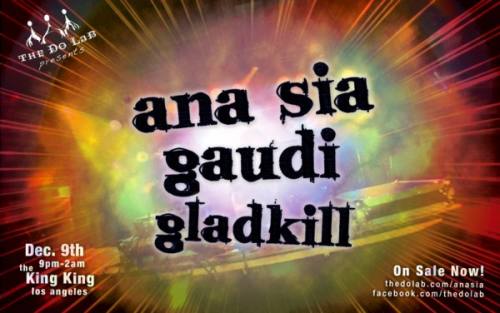 What: The Do LaB presents Ana Sia, Gaudi and Gladkill

Join us as we end 2010 with a BANG! It's been an amazing year for us, and we're excited to close it out with a special night of music featuring Ana Sia, Gaudi and Gladkill! All three artists have released new albums this year and we're looking forward to getting down and dirty on the dance floor with all of you!!

Ana’s energetic delivery of brain-fazing beats has earned the Princess Slay-ah an important spot in pioneering the West Coast future sound movement. She will take you on a musical expedition into the deepest reaches of your brain, as she masterfully blends a wide spectrum of rhythms with a beautiful fluidity and a delicate sensibility, giving the dance floor a delightful ride that ends at the corner of bliss and oblivion.  Uniting the best elements of dirty dubstep, grimy glitch, and her personalized blend of “global slut psy-hop,” Ana Sia’s sets confirm crunk status of all who dare enter into her seamless world of sound.

Gaudi’s eclectic style and versatility has kept him at the forefront of his field throughout a notable and prolific career. His music is an organic fusion of Dub, Electronica and Worldbeat. There is a natural sensitivity to Gaudi’s music which enables him to unify different forms of sound from around the world and represent them in his own personal style, while at the same time, most importantly, keeping the heart, integrity and significance of the cultural roots.

Siberian born, New York raised producer and musician Boris G has been writing and performing as Gladkill since 2007. Drawing from years of musical experimenting with many genres and instruments, Gladkill combines several elements of electronic music to craft his signature sound. Gladkill can best be described as a combination of melodic IDM hip hop fused with bass-heavy rhythms reminiscent of the "Acid Crunk" and Dubstep sound. "Everything inspires me. Silence is my canvas."

Featured Lightning in a Paintcan Artist:

Ceci has performed Live Painting at Symbiosis gathering, ArtOutside festival, and The Do Lab's Lucent L'Amour & Lightning in a Bottle.

(entrance is in the back)