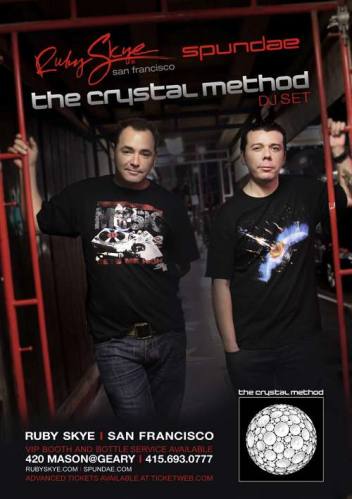 
Together Ken Jordan and Scott Kirkland steer their custom vehicle of electronic music into riffs of futuristic rock ‘n’ roll. Taking the elements associated with the U.K.’s big beat generation, the Crystal Method enhances this style of stomping funk with a pinch of American spice.


Those bright lights of America’s modern-day adult playland would seem to inspire anyone to become something loud and colorful. That influence reflects the early ambitions of Jordan and Kirkland and their endeavors to make mind-bending music.


The two met while working for a college radio station in Las Vegas where Run DMC, New Order and Depeche Mode were mainstays of the regular rotation. The duo became interested in music production and recorded some lo-fi demos on a four track with a female lead vocal.


Figuring he could find a faster way to the top in Los Angeles, Jordan left for the City of Angels, where he landed a job as an assistant producer for artists Edie Brickell and Michael Penn. There he found the necessary studio experience he needed and the necessary nightlife experience he needed; L.A.’s underground scene exposed him to the flavor of West Coast nightclubs and the freaky funk being tossed about by rave DJs.


Meanwhile back in Las Vegas, Kirkland began taking guitar lessons from Mark Slaughter of the metal band Slaughter, learning power bar chords and the philosophy of establishing a listener-friendly hook. Keeping in touch with Jordan, Kirkland fed off of what his friend had been telling him about the psychedelia of L.A.’s club scene and went to check it out for himself. There and then the Crystal Method was born.


The bombastic grooves of Vegas, the group’s first full-length release has been likened to the Chemical Brothers’ brand of breakbeat mayhem. Yet the Crystal Method madness is cut from a more acidic quilt, where synthesizers squelch and sirens buzz and the vibe is all about crowd-pleasing intensity. Highlighted by the tracks “Trip Like I Do,” a different version from that of the collaboration with Filter for the Spawn soundtrack, and “Keep Hope Alive,” a Chemical Brothers essential big beat favorite, the album manages to capture the same raw power of rock ‘n’ roll with electronic components.