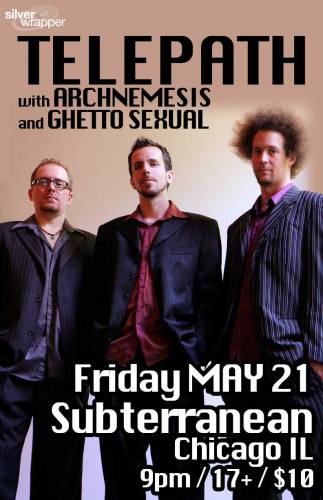 Music is a collective language. It can bring a sense of community among strangers, regardless of language, nationality, or beliefs. It can provide the listener an environment for creative thought and unrestrained emotion. It can manifest the beauty of people and cultures who may be thousands of miles apart. The music of Telepath strives to do all of this. Formed in 2006 and hailing from Philadelphia PA via Asheville NC, TELEPATH is a unique new expression in the current live and electronic music scenes. The 3-piece comprised of Michael Christie (keyboards), Curt Heiny (bass) and Mike B (drums) use a wide variety of self-created samples containing Indian and Arabic singers and musicians, Afrobeat-influenced horn lines, dubbed-out effects, and much more to generate the multi-layered sound that is Telepath. Extensively touring in support of their debut album Fire One (2006), Telepath has played to passionate audiences at theaters, clubs, and festivals around the country. Now, with the September 2008 release of their second album Contact, Telepath continues the development of a loyal and ever-growing fan base, as well as their commitment to creating a positive and inspiring environment both on record, and in live performance.