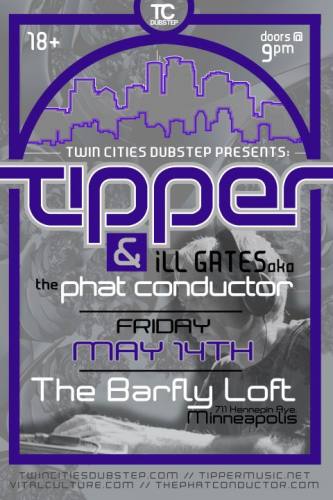 Friday May 14th at the LOFT , TIPPER & ILL Gates A.K.A The PHAT CONDUCTOR . Doors at 9PM
$15 Advance tickets / $20 Door
Tickets available soon at : www.tcdubstep.com
TIPPER:
Dave Tipper is one of the most influential producers in the breakbeat, and underground hip-hop scene, known best for his signature wobbly bass and twisted soundscapes. He’s been cranking out mind blowing tunes since the late 90’s and has produced, remixed and mastered material for countless other influential artists. Tipper was one of the first DJs to mix and spin in 5.1 surround sound and he used to hold the record for the loudest car in the world. Sub frequencies have always been a huge part of his music as he loves the way it makes people feel “all warm and wobbly.”
At 16, he got into rave and drum & bass but eventually grew bored of the fast repetitive beats. After much experimentation in 2000, he slowed things down for his debut full length release, The Critical Path. It’s unlike anything I’ve ever heard. It’s a dark electronic album full of morphing synths, beats and tempos. It has beautiful pads blended with crunchy stuttering drums and soft female vocals—glitchy alien synths, haunting atmospheres and loads of ridiculously cool sounds.
In 2001, Tipper released his second full length, Holding Pattern. This album is slightly cold compared to The Critical Path, but took sound and tempo manipulation to a new level. The 2003 release, Surrounded, was one of the first electronic albums to be mixed in 5.1 surround sound. Where it lacked in dancefloor breaks, it made up in thick haunting atmospheres and chilled out downtempo beats. The ability to change up one’s styles effectively on every release is a sign of a true artist and Tipper has no interest in spending too much time in one genre.
In 2005, Tipper released Tip Hop, his first hip-hop album. He told Clash Magazine that he had offered all he could to the breaks genre and wanted to focus on new styles. The 2006 album, The Seamless Unspeakable Something, dug deeper into sound design and quirky melodies. By 2008, Tipper’s releases had surpassed categorization. Wobble Factor transcends all previous conventions of electronic music. It’s an incredibly fun ride through sub bass anarchy and sonic manipulation. Tipper confesses that he just loves to make strange noises, regardless of their lack of chart success. He makes music solely for himself. The fact that so many of us can’t get enough is beside the point.
ILL GATES:
ill.gates’ is not so much an emerging artist as an emerging moniker of an established producer creating a new alias.
ill.gates, from Toronto Canada, is also known for his productions as ‘The Phat Conductor’ with releases on 2 Wars & A Revolution, Whomp, Promo, Dubble Sided Vinyl and also Venom records.
He is one of Canada’s leading underground exports, holding it down since 1995 with gigs as far as Switzerland, the U.K, Burning Man, NY and the legendary Shambhala Music Festival in the rainforests of British Columbia. His diverse style covers all genres from Electro House, Techno, Breakbeat, Hip-Hop, Dancehall, DnB & IDM/Glitch. No matter what the venue, ill.gates can suit his style to the crowd and keep the dancefloor rocking.
Recent collaborations and remixes under his two guises include a remix for Si Begg on Noodles, remixing the globe trotting Myagi and heavy hitting breaks and four to the floor tracks with Robb G on Promo Records. All these have been receiving high acclaim from established press.