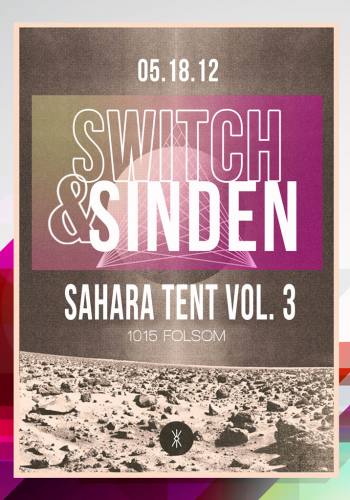 What: Switch and Sinden


For this event only, there are a limited amount of VIP tables available.


Includes 6 tickets, table and seating for 6, express club entry, and one premium bottle of alcohol with mixers.


From his incendiary DJ sets across the globe to his remixes and productions, Dave, aka Switch and also known as Solid Groove, has created his own type of innovative jacking house that draws from all the best bits of electronic music.


His Dubsided label continues to flourish, releasing his own music as well as that from house music's brightest young stars. Only ten releases old the label is a must have in the boxes of all the best DJs and sells out as soon as it hits the shelves.


Dave has been shooting all over the world in search of exciting new music, but comes home to the UK regularly for a residency at the legendary Fabric club.


He is producing much of the new M.I.A. album, remixing everyone from Medhi to P Diddy, and putting the finishing touches to his Switch and Solid Groove album projects. Catch him if you can.


Straddling a bass heavy club sound that also encompasses leftfield rock music and global beats, Sinden is renowned for his genre-blending DJ sets, cracklin’ hot radio show, his banging remixes, and for being the Sinden in hotly tipped ‘The Count & Sinden’ and, alongside Herve.


His DJ career sees him criss-crossing the globe turning clubs on their heads with his fresh, eclectic sound, and throwing Count & Sinden’s Mega Warehouse parties in the UK. He had recently begun a column in the UK’s DJ magazine, and he’s also known for his lauded show groundbreaking UK radio station Kiss FM. Sinden’s show on Kiss was the first of its kind to host an eclectic selection of music that includes Funk Carioca, Baltimore Club, Kuduro, Juke House, Southern Hip Hop, Dancehall, House/Electro and much much more.