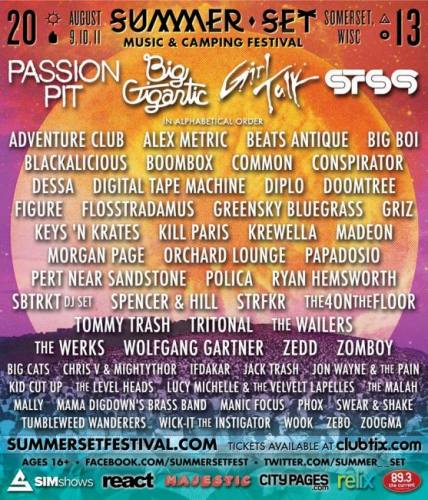 Tritonal | The Wailers | The Werks

Last year, SSMF welcomed over 30,000 people to the beautiful grounds at Somerset Amphitheater with 40 national and international artists! This year, the festival is expecting over 45,000 people with more than 50 artists from around the world! Last year, the festival was headlined by Pretty Lights, Umphrey's McGee, Big Gigantic, and featured performances by the legendary NaS and Black Stare (Mos Def & Talib Kweli). This year, all of the artists will perform across three stages on the grounds, which is surrounded by the Apple River on the border of Wisconsin and Minnesota.

SSMF is produced by React Presents, based in Chicago, IL, the Majestic Theater in Madison, Wisconsin, and Sound in Motion based in Minneapolis, Minnesota. Together they produce thousands of events each year, multiple festivals, and own and operate venues throughout the Midwest.