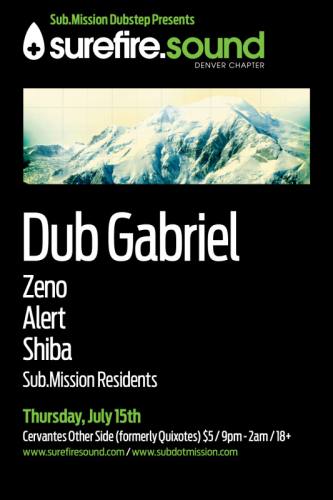 Surefire Sound: Denver
Presented by Sub.mission
July 15, 2010
DUB GABRIEL
http://www.myspace.com/dubgabriel
Producer, DJ and multi-instrumentalist, Dub Gabriel has been pushing the limits of subwoofers worldwide for over a decade. His musical explorations in Brooklyn in the mid 90’s drew him to the outer limits of the New York scene where he got his start as a DJ at the legendary Limelight club. With his early sound being a portent of today’s burgeoning dubstep scene, his bass-bending style and hard-hitting sets launched him as a trailblazing figure in the New York underground club scene and gained him the attention of leading publications that include XLR8R, Interview, Billboard, Pitchfork, Time Out New York, The Wire, International DJ and countless others.
Today, Dub Gabriel’s live performances continue to push the sonic envelope and herald the end of traditional DJing as we know it. One of only three artists in the world endorsed by Akai for their APC40 controller (the other two being Trent Reznor and Pete Townshend), his electrifying performance-driven sets blur the lines between DJ, sound system and live electronic music. His unique style has created much demand on the international circuit and has seen him perform regularly alongside a truly diverse set of cutting-edge artists that include Kode9, DJ Craze, Benga, Bomb Squad, Jazzanova, Scientist and Meat Beat Manifesto. Dub Gabriel is as a regular guest at Francois K’s legendary Deep Space night at Cielo in NYC and he has even captivated the crowds at last year’s Givenchy runway show during China Fashion Week in Beijing, Puma’s World Cup party in Berlin and, at the 50th Anniversary of the United Nations Plaza Peace Bell Ceremony.
As a solo artist and producer Dub Gabriel has dropped three albums and a string of singles in collaboration with a Who’s Who of artists that include U-Roy, Michael Stipe (REM), Yo Majesty!, The Master Musicians of Jajouka and members of Gogol Bordello, Bauhaus, Meat Beat Manifesto and P.I.L. His demand as a studio remixer continues to grow, with Balkan Beat Box, Lee Scratch Perry, David Lynch, and Raiz being some of the more recent notable artists to enlist his services in the studio.
Dub Gabriel’s upcoming single with MC Zulu is slated for release Aug. 2010 and will see him on an extended European tour in support as well as selective cities in North America.
ZENO
http://www.zenodub.com/
ALERT
http://www.myspace.com/seanalert
SHIBA
Cervantes Other Side
$5 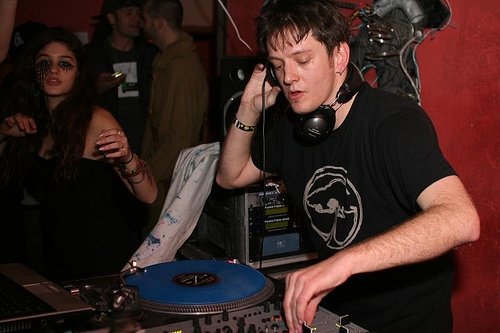