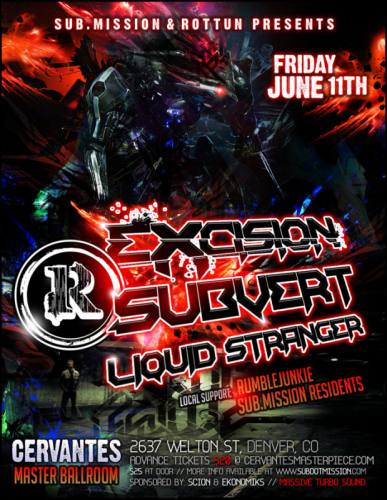 FRIDAY, JUNE 11, 2010
Sub.mission and Rottun Present...
EXCISION
Taking influence from DnB, Metal, and Hip Hop, Excision is a Dubstep artist who must be heard to fully believe. Combining the morphing bass lines of Drum and Bass, the aggressive energy of Metal, and the laid back vibes of hip hop, Excision's style is incomparable.
This young Canadian's passion for music has already driven him to become one of the biggest Dubstep acts of North America. Anyone who has heard a set by this bad boy has walked away feeling energized and refreshed. If your lucky enough to catch a dj set, expect an assault of bass heavy tracks, mixed quickly and seamlessly.
Having done remixes for Pendulum, Noisia, Wu Tang, Freestylers, Ctrl Z, Apex and the mighty label Lifted, it has become apparent that there is a large demand for the dark side of Dubstep. Look out for more of Excision on his labels Rottun Recordings & EX7 Music, and collaborations with Bassnectar, Pendulum, Datsik, Downlink and many more. Following a U.S. & Canada tour in early 2010, watch out for Excision in the UK, Europe Australia, and New Zealand.
This dubstep assassin has more work in the pipes than your grandma's old toilet.
His tracks are getting plays from headliners worldwide and is touted by many as future star in dubstep.
Watch for upcoming collaborations with big names such as Bassnectar and pendulum.
http://www.myspace.com/excision
http://www.facebook.com/excision
SUBVERT
Subvert hails from Calgary, Alberta and his winding path in music started in 1996. Proof of his dedication to ‘Bass’ is in his track record of creating the world’s loudest competition vehicles, designing pK’s 100,000 watt sound system and managing the Village Stage at Shambhala Music Festival. He started DJing in 2000 and combined with his extensive work on sound systems and attention to
precision sound, he was ultimately & naturally led down the path to creating his own music productions and once again the low frequencies consumed him. Subvert’s sound is a combination of throbbing, relentless basslines, melodic strings and haunting pianos singing through midtempo glitch / acid crunk and dubstep. His attention to detail and the ability to tune into ‘bass that works’ can be felt in all of his music productions.
It’s all about the bass…..
www.myspace.com/subvertsounds
www.pksound.ca
www.shambhalamusicfestival.com
http://www.mutimusic.com
www.rottunrecordings.com
LIQUID STRANGER
http://www.myspace.com/liquidstranger
RUMBLEJUNKIE
After sifting through all the Dubstep out there and hearing Dubstep on a 30,000watt system at Burning Man '07, Wes was convinced that Dubstep was the future and found the sounds he was looking for in the genre and began djing it. Soon after, joined his mates in Sub.Mission, an all Dubstep promotion company based in Denver. Wes has since been booked in Chicago, Santa Fe, all around Colorado, and even in Arkansas, with many more cities to come. He spends as much time as possible in the studio and has releases on the labels: Sub.Mission, Dirty Circuit Records, Dubfront, Filthy, Adversion, and soon to be Tuff Luv and Section 8. The first song ever released under the Rumblejunkie alias, "Dope Angel", made it onto MTVeurope in the form of an MTV "bump", and the B-side was a remix by Antiserum. Tunes such as "Training" and the weed anthem "Everyday" have been well recieved in the Dubstep community. His style is edgy and darker, yet groovy with huge sub and grungy/grindy basslines with an occasional deeper track often sprinkled with pop culture samples and references.
http://www.myspace.com/rumblejunkies
Cervantes
$20 presale/ $25 door
Sponsored by: Ekonomiks and Scion
www.subdotmission.com
Listen to Dank Dealz every Saturday for a chance to win tickets to Sub.mission events!!!
www.dubstep.fm
__________________
Sub.mission Events
MAY 20- SFS: DEN DLX
MAY 29- HEADHUNTER and NOAH D
JUNE 11- EXCISION, SUBVERT, LIQUID STRANGER