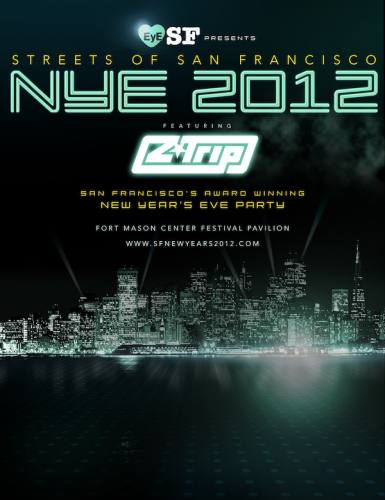 What: STREETS OF SAN FRANCISCO NYE 2012 with Z-TRIP


"STREETS of SAN FRANCISCO" NYE 2012 is back for the third consecutive year with another next level production and this year "the Streets" will take on an extremely special futuristic theme.  Join EyeHeartSF as we transform the Festival Pavilion into a playground of future sights, lights and sounds, imagining what our 'city by the Bay' might look like many decades from the present day. If this is your first year attending "Streets of SF", or if you have experienced this award-winning NYE before, this years event promises to be our most memorable project to date.


Named the "Best Event of 2010" (under 5,000 guests) by the California Music And Culture Association and the rated #1 NYE party on the West Coast by the Huffington Post, STREETS of SAN FRANCISCO returns to the historic Fort Mason Festival Pavilion.  Featuring a premium hosted bar (9p - 2am) with the largest bar staff of any NYE party in the Bay Area and the best bartender to guest ratio anywhere. Beyond the unmatched bar service and trendsetting crowd, the event space is famously transformed and boasts panoramic views of the entire Bay from Alcatraz to the Golden Gate bridge, front row seats to the fireworks shows, signature midnight champagne toast, and a special headlining set this year from legendary, dj/producer Z-TRIP.


Z-TRIP, often considered to be one of the best Live Performance DJ's in history, has once again redefined himself as an all-time great. Voted the #3 DJ in AMERICAin 2011 right behind Kaskade and Skrillex, he uniquely made waves all over the world map this year with show-stopping appearances at the Electric Daisy Carnival, as well as tour stops with everyone from Bassnectar to LL Cool J. His signature mixing has headlined everywhere from Las Vegas to Coachella to Bonnaroo as he masterfully blends genres from hip-hop to rock, dubstep to electronic dance music, and then some. The legendary party rocker has been setting standards for years, called by SPIN magazine, "The original Girl Talk; only better. The best DJ show ever." With these kinds of credentials he was the perfect choice to help take us "Back to the Future" for the STREETS of SAN FRANCISCO NYE 2012.