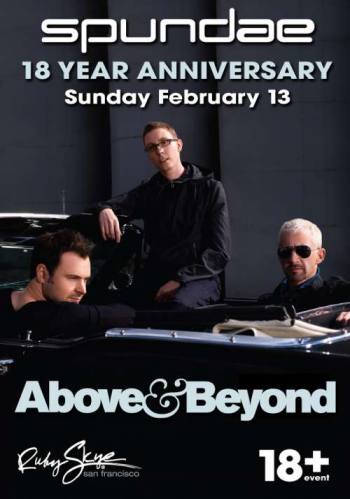 What: SPUNDAE 18 YEAR ANNIVERSARY featuring Above & Beyond


“Few trance artists have reached Above & Beyond’s stature in terms of integrity and respect.” IDJ

“A cut above.” Mixmag

There are DJs who can rock a party, a club, a festival. And there are acts that can write songs that will bring out the goose bumps in you. But there’s only one group that can do both: Above & Beyond. Currently fourth in the DJ Magazine annual poll – the highest-placed Brits – in the last year alone, they have sound-tracked the unveiling of a new space-ship, performed an acoustic show in a hot air balloon, and entranced a crowd of 8,000 in Beirut with their first full live show. For the world’s most famous trance trio, there are no limits. “There’s so much going on,” says Tony McGuinness. “We’re trying to do so many things.”

From remixing Madonna (2001), to winning Essential Mix of the Year (2004) or playing to one million people on the beach in Rio de Janeiro (New Year’s Eve 2007), Above & Beyond’s career has been a constant upward curve since the trio formed in 2000. Because Above & Beyond make music, pure and simple. That music happens to be electronic. And it connects. “We’re a group,” says Tony. “And we’re trying to connect with people. When you see people singing along as passionately as they do, I guess you’re getting it right.” The key difference is this: Above & Beyond are DJs, producers – and musicians. “We like to think of ourselves as songwriters first,” says Paavo Siljamaki, who with Jono Grant makes up the trio. “The most challenging thing is to write a song that really touches the listener.”

Creatively and geographically, Above & Beyond don’t believe in borders. Hence 2009’s full live band show in Beirut, Lebanon. “What an undertaking,” says Tony. “We decided to do a really big, high production live show. It was an enormous undertaking and a risk.” It was the first time they had translated the Above & Beyond sound to a live line-up – drums, bass, guitar, keyboards, singers Zoe Johnston and Richard Bedford. “People were blown away and we felt blown away by it ourselves,” says Tony. And Beirut left its mark. “They rebuilt the town centre, it’s beautiful,” says Tony. “But we did a photo shoot in an old Chevrolet showroom and it had bullet holes, and the driver had fought on that very roof, and was picking up shell cases and explaining what happened.”

At the other end of the scale, the group played an acoustic show for two fans and BBC Radio 1’s Pete Tong in a hot air balloon as it sailed serenely over the English countryside. At one point, the driver flew the balloon at little more than a metre over a field of wheat. “It’s like a dream sequence in a movie, because you’re not flying fast or up and down, you’re looking at something you would never see in nature,” says Tony.


From small, East European club shows to major festival like America’s Coachella, Above & Beyond have a unique ability to captivate and engage audiences. Their music has grandeur and melody, but it’s edged with steel too. There are dark shadows among the sweet moments. Trance is too small a word for their cinematic, ambitious sound, it’s bigger than genres.