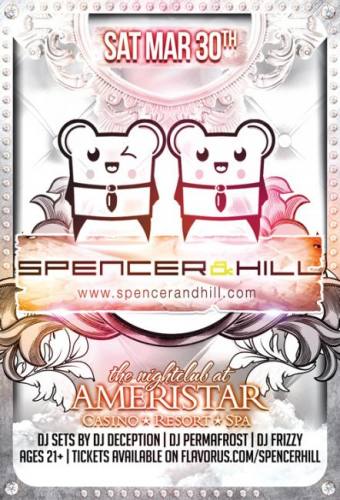 What: Spencer & Hill at The Nightclub at Ameristar 3/30

For the next event in our series at The Nightclub at Ameristar, we are bringing an amazing act that has never performed in St. Louis, Spencer & Hill. On one of their rare visits to the US, this will be an amazing show. Providing additional DJ support will be DJ Deception, Frizzy and Permafrost.

Spencer & Hill:
Spencer & Hill is currently one of the highest acclaimed dance-electro projects within the international club scene.
The impressive amount of national and international dance chart toppers like e.g. “Housebeat“,“Right On Time“ and “Cool“, within the last decade makes them part of the elite of electro-dance producers worldwide.

Lately, Spencer & Hill proved their incomparable sense for sound and trend setting abilities by e.g. “Yeah Yeah Yeah”, which shot straight to Top 1 on Beatport and into the Top Ten of the most important European Dance Charts.

With their recent signings of tracks like “Dance” at Steve Aoki’s “DIM MAK” and “Beatrocka” at Afrojack’s “Wall Recordings”, they proved once again their affinity to the Top 10 Electro acts.

Due to their unique sound, most of the Spencer & Hill releases became massive club tunes that head the national and international DJ playlists in an impressive way.

As artists and producers, Spencer & Hill produce music that rocks the coolest clubs, festivals and yet proudly head radio hit-lists and international charts. They succeeded in both being credible, authentic electro DJs but also being mainstream, having huge crossover success. Their long-awaited debut album “Housebeats Made in Germany” was successfully released in 2010 and hit the Itunes Top 5 in several territories.

New collaborations with huge international acts are already in progress, so in the future we can expect a lot more Housebeats made in Germany!

No hats, shorts, or sandals. Dress to impress