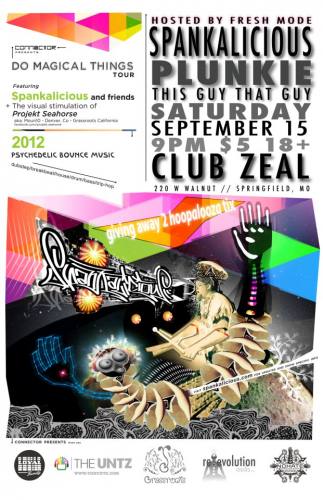 You heard it right. Sept 15th Spankalicious will be gracing us with his music at your favorite weekly: Fresh Mode. We will be having tons of giveaways including 2 tickets to the upcoming "hoopalooza"!
Featuring: Spankalicious, Plunkie, and special guest!

SPANKALICIOUS is BOUNCE!. Kevin Moore recently transplanted his Midwest home base from St. Louis, Missouri to Cincinnati, Ohio where he is holding down a new residency and gearing up for festival season.

In 2011 Spank played more than 100 shows, traveling more than 90,000 miles, meeting amazing people while attempting to spread a message of higher awareness and social consciousness. From sunrise sets in the French Quarter of New Orleans to the 4:20 set at Wakarusa 2011, and many places in between, Spanky has been consistently rocking parties at every stop. Playing alongside every major cutting edge act in livetronica, bass music, electro, and hip-hop (Pretty Lights, Caspa, Borgore—the list goes on) as well as several major festival appearances including Sonic Bloom, Bassnectar’s First Bass Center, Camp Euforia, and more.

Spankalicious already in 2012 has made his triumphant return to Summer Camp Music Festival, as well as made his debut at The Manifestation Celebration in Dallas, the inaugural IMPULSE Music Festival in Georgia, and the blowout Camp Bisco XI in upstate NY alongside some of the biggest acts of today. An extensive background in rudimental percussion and drumline allows Spank to read rhythms inside and out and even incorporate live drumming into his sets. With musical influences ranging from the Grateful Dead and Phish to U.G.K. and Three Six Mafia, Spanky has found his niche in his world of Glitchy Hippie Psychedelic Bounce.

2012 has seen the release of Psychedelic Boogaloo Intervention, his third studio album. Recently, Spankalicious unveiled his signature hat from Grassroots California, which was paired with a huge performance at Cervantes’ Masterpiece Ballroom in Denver, Colorado. Right now, all eyes are on the upcoming Do Magical Things North American Tour featuring more than 30 dates and pairing him with acts like EOTO, Archnemesis, Dr. Fameus, and the gamut of the top global EDM performers at the inaugural Counterpoint Music Festival in Atlanta, GA.

With his roots going as far back as the early 90's, Plunkie is no newcomer to the music scene. His high energy, crowd interaction, and bass filled personality is sure to please. Being involved in the EDM scene for nearly 9 years now, Plunkie has seen it all. Playing on the same bill as names such as Figure, Steve Aoki, Datsik, Spankalicious, Terravita, and more. With his mindset now completely on learning how to incorporate his own ideas and sounds into his music, the only way to go is up and that is exactly what his goal is. Follow his production on soundcloud.com/plunkie .