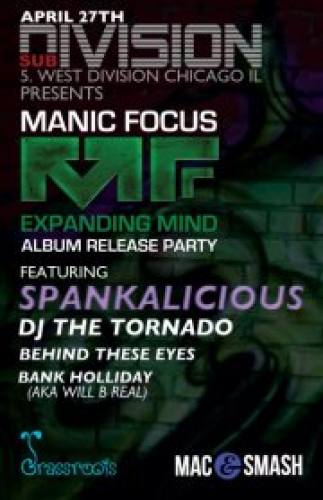 What: Spankalicious in Chicago IL 4/27

In 2011 Spank played 100+ shows, traveling over 90,000 miles, meeting AMAZING people while attempting to spread a message of higher awareness among the people. From sunrise sets in the French Quarter of New Orleans to the 4:20 set at Wakarusa 2011, and many many places in between Spanky has constantly been rocking parties at every stop. Playing alongside every major cutting edge act in livetronica, dubstep, and edm as well as many major festival appearances including Wakarusa, SummerCamp, Sonic Bloom, Bassnectar\'s First Bass Center, Camp Euforia, and is already slated to take the stage at this year\'s SummerCamp Music Festival!