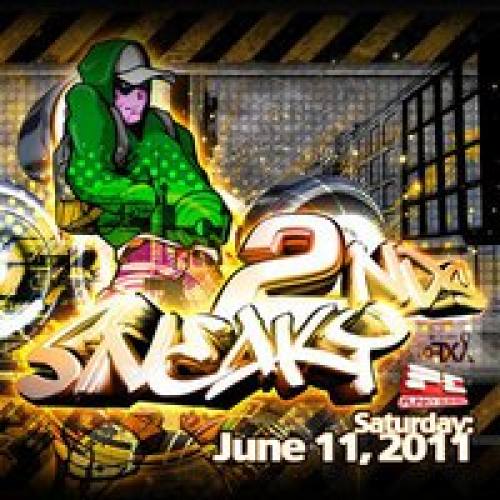 It was the year 2003... 1500 party goers from all different walks of life, races, religions, ethnicities and backgrounds came together and formed one of the most powerful underground vibes NYC has seen to date. This summer we invite our friends and family ... old and new ... to get down and dirty with us ... one more time Good music is good music... and it was , is, and will always continue to be... ALL ABOUT THE MUSIC! Lace up them danicn' shoes... Its about ta get real hectic up in this motha fuck!

Perhaps the most loved and respected Acid Techno D.J. of all time, it is fair to say that Chris has probably played more squat parties, underground raves, technivals, festivals, clubnights, and parties worldwide in his 18 years as a D.J. than any other person alive, and is still completely dedicated to the music and the scene he got involved with when he started doing parties with the other two Liberators, Julian and Aaron back in 1991. D.A.V.E. The Drummer is a man on a mission... He started his career in 1995 as the producer for the infamous Liberator DJs in London, working with them as programmer, mix engineer and collaborator on the Stay Up Forever Label. The label grew, and soon Cluster records was born, along with the sound of London Acid Techno. Many other labels followed, and DAVE recorded and produced on most of them, labels such as Smitten, Routemaster, Raw, Eukatech, TEC, Boscaland, and DAVE's very own HYDRAULIX imprint formed the backbone of the Acid Techno movement, which has now invaded most countries around the globe. With his trademark grooves and crisp productions DAVE has gone on to make some of the most respected classic Acid Techno records in the world. Tonight we will make history... An exclusive tag team set.. Acid techno and hard bass London Acid City Styleeee!

The Man, The Myth, the legend... That is DJ Frankie Bones. He is best known for bringing the rave culture to the United States after playing at a hangar party in the UK during 1989. Frankie Bones, the first American DJ to play these raves, is considered to be 'The Godfather of American Rave Culture'. He got his first inspiration from his father's vast record collection after his father was murdered. Later on, after he had begun producing records, he was offered a gig to play for 5,000 people in England called "Energy" on the strength of his compositions. As the event started on August 26, 1989, the projected attendance had gone through the roof and Frankie played to 25,000 people while the sun came up. At this event, a fight broke out and Frankie got on a speaker, screaming at the fighters, "If you don't start showing some peace, love, and unity, I'll break your fucking faces". With the subsequent discussion of this event on the Usenet newsgroup alt.rave, Respect was added to the three virtues Frankie was speaking of, creating the hippie-esque raver credo of PLUR: Peace, Love, Unity, and Respect. Being profoundly moved by the experience, he brought it back to Brooklyn in the form of his series of Storm Raves. The Storm Raves events began with only a few hundred people in attendance growing to over 5,000 where the likes of Josh Wink, Doc Martin, Sven Vath, DJ Keoki and Richie Hawtin were able to launch their performances into international careers. The Berlin Love Parade, which is generally considered to be the largest rave in the world, named its 1991 and 1992 Parades after well-known compositions by Frankie Bones. Don't miss out on this exclusive rare classic appearance where Frankie will transform "Sneaky 2nds" back to the days of the Storm Rave!

Named No 1 'Hard DJ' by Mixmag in 2004 & 'Best Worldwide Teckno DJ' by the Scottish Dance Music awards 2 years in a row, Lenny Dee founded Industrial Strength in 1991 which was the first Hardcore label in the world. He has also written & produced on labels such as Nu Groove, 4th floor, Warner Bros, Strictly Rythmn, R&S , Atlantic Records, Stay Up Forever Collective and currently has a track on PS2s Grand Theft Auto: San Andreas' (as "Fallout'). Lenny's first residency was at the local roller disco Roll-A-Palace in Brooklyn NY at the age of 17 and has played all over the world at some of the biggest parties such as MayDay, Love Parade, Woodstock, Tribal Gathering, Helter Skelter, Rezerection, Energy, Thunderdome, the Jane's Addiction Reunion tour & the list goes on. Come and see one of the earliest creators of Hardcore & Teckno - Mr. Lenny Dee. We welcome back Lenny who never lets us down in completely and utterly demolishing the dance floor at all of our events. Don't miss out on hardcore techno ... AT ITS BEST!

The 90s Trance King Of New York, still in effect and prepare yourselves for a special Old Skool set, featured weekly on Sound Function Ultraz Radio on BSP.Org and drops a new set every month: http://soundcloud.com/dever44. A Staple in the New York City Hard Trance movement. The Dever has demolished dance floors from NYC to LA to abroad. With his legendary Uptown Underground crew, they were responsible for throwing some of the largest and most successful events during the 90's. Still in the mix, Tonight for his first ever Funky Element appearance, The Dever aka the trance king of New York, will be dropping a classic hard trance set that will sure once again devour the dance floor and make you sweat. Prepare your self for Pounding bass and twisted acid synths as Uptown Undergrounds front man will show you once again why he is still the #1 Trance king of NY.

The man behind the Funky Element Productions & Recordings NY crew has been hard at work. A veteran DJ for the past 12 years and veteran promoter for the past 11 years, DJ Dank has demolished dance floors up and down the east coast. Hot off his Performance of his signature style for the thrid time at this years Winter Music Conference held in Miami, FL. Don't miss what all the hype is about as the the return of NYC's Electro Bad Boy is in FULL EFFECT. This Producer, Re-mixer, DJ, Events Coordinator, Label Owner has booked and played along side some of the hottest talent on the planet including... Rabbit In The Moon * Live, Armand Van Helden, Uberzone * Live, Lazy Rich, Donald Glaude, Charles Feelgood, Scott Henry, Frankie Bones, Goldie, Grooverider, Aphrodite etc to name just a few. 2010 marked the year he started his label Funky Element Recordings with the first release titled "FuNK eL" Remixed by superstar Lazy Rich hit the beatport top 100 off the bat. The same went for his second release titled "Heat Me Up" on this newly established label. With bookings increasing domestic as well as abroad be on the look out tonight for a closing set of massive bass and super funk. With his signature style, of bass in your face "Don't Talk About It... Be About It" DJ Dank vows to continue on his path of moving dancefloors till the early morning. Don't miss out on this one... It's about to get real hectic up in this motha fuck!

AK1200 (Dave Minner), an Orlando, Florida-native, widely recognized as The Godfather of drum n’ bass in America, has the longest running career of any drum n’ bass DJ in the US - the first to give exposure to hundreds of UK based artists in the states. Truly an asset to the electronic dance music community, his lengthy list of credentials speaks for itself. From his writing background with UK and US-based music magazines, to his A&R work for Moving Shadow, all elements have served to create incredibly high demand for his performances and production work, taking him to all corners of the earth. AK’s extensive discography includes collaborations and remix work with talent quite diverse in range - from electronica greats Rabbit in the Moon and Crystal Method, to hip hop’s Tribe Called Quest. His classic remix of Cleveland Lounge's "Drowning" is one of the most widely recognized drum n’ bass songs in America. His works have been released on labels such as Moonshine Music, FFRR, Jive

Electro, Moving Shadow, and Breakbeat Science. Tonight we welcome this drum n bass pioneer for an exclusiveSneaky set that will for sure be remembered for years to come!

Arriving in New York from London in '89, it could be argued that no one has done more for Drum & Bass in America than DB. First with his hardcore Breakbeat club NASA, (featured in the Larry Clark film Kids) then by launching Sm:)e Communications and releasing the first Jungle singles & compilations in the U.S, as well as signing dj Dara, thus kick starting his artist career. In 1996 Dara & DB opened Breakbeat Science, dedicated to Drum & Bass, It quickly become not only the most respected record store & label, but also the very epicenter of the jungle community in the U.S. DB recently released an artist project with partner Stakka under the name Ror-Shak, focusing & pushing the limits on the more musical side of the genre, which as a dj, is what he has become best loved for. Dara has become one of the biggest names in U.S. Drum & Bass history, being part of the legendary Planet of the Drums Tour & every weekend continues to push the harder side of the genre. His brilliant recording endeavors along with his incessant touring markey by consistently awe-inspiring DJ sets have made him one of the most recognized and well respected DJs in the country. Don't miss out on this set as these two drum n bass pionners teach us an old skool lesson in jungle / drum n bass!

Odi as he is known to the world, does not look like the type to have a group of beautiful women fawning over him. And yet, there are several that I have to get through to talk to him. People murmur “respect” as we walk outside. Their admiration is not underserved. Odi, is in great part responsible for the entire style of jungle music in NYC. “I can’t think of anything that makes me happier,” he says. “Every show makes me better.” For years Odi has performed at numerous Funky Element events and we are proud to welcome the king of NYC Jungle back again for his secondSneaky performance. He completely tore the roof off last time... This time he vows to give us a Double Dose of that same epic performance.

Since the projects birth, late 2008, Hellfire Machina have literally exploded into the worldwide bass culture scene. From A&R and production credits on last years Wu Tang Enter The Dubstep album - 30 plus single releases and remixes - Running the biggest dubstep monthly in New York City - Holding down DJ residencies all over the country - To recently producing 6 tracks for Brand Nubian's latest project Enter The Dubstep volume 2. It's now 2011 and already these guys don't seem to be showing any signs of slowing down. This is the age of the machine with Hellfire firmly at the controls! Don't miss out on these heavy weight bass monsters... for this is only the beginning!