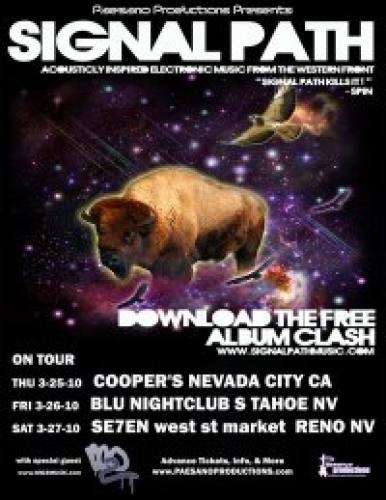 Paesano Productions Presents
SIGNAL PATH
special guest MO2
www.PaesanoProductions.com
For almost a decade, SIGNAL PATH’s mission has been to push the boundaries of electronic music in the performance setting. As one of the pioneers of their genre, Signal Path has influenced countless artists across the country, been downloaded by tens of thousands of loyal fans nationwide, played almost every major US festival, and has gained international recognition for their live shows.
In the next phase of Signal Path, and almost two years since their last major tour, fans find the band producing a sound that has become more mature, authoritative, and immense. While still blending both live instrumentation and computer generated production, Signal Path is creating some of the most progressive music in their history. Originally a duo, Signal Path comes full circle with Ryan Burnett producing and playing guitar and Damon Metzner on the acoustic drums. This configuration allows the sound to become focused, spontaneous, and rich.
With a new record made available to their fans absolutely free through their website www.signalpathmusic.com, The Path is back!
MO2
Getting their start in San Francisco's underground club scene, MO2 has since earned a national following by combining four-to-the-floor dance breaks, drum n bass, hip-hop and dubstep with contagious pop hooks and ethereal progressions; their explosive and unique sound continues to leave audiences mesmerized nationwide. As HMGN Music puts it “Burgeoning, upstart, fresh-faced, young, up-and-coming…all these words and phrases describe San Francisco’s MO2…They are a very determined and talented band performing with palpable joy and intense respect for one another, demonstrating the power of simplicity and organic melodies."
www.mo2music.com