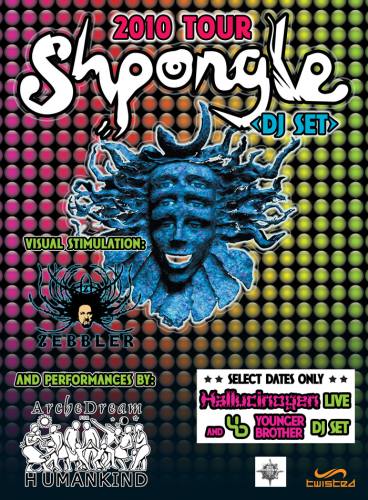 Wednesday – 4.14.10 Shpongle with Prometheus and Tipper!!!
With over 80 years experience collectively Simon Posford and Raja Ram are more than qualified for the exploration into the unclassifiable music frontiers they have ventured into; ‘SHPONGLE’ is a new world of traditional sounds, acoustic guitars, Moroccan drums, Turkish operatic singing, cello, double bass, backing vocals and silver flute blended together with the computer wizardry of Simon Posford’s studio production.
Simon Posford (aka Hallucinogen) has long had a reputation as the, ‘Hallucinogenius’ a imitable pioneer in sound experimentation, from his seminal first album, ‘Twisted’ which reached No.28 in the French charts selling over 50,000 copies worldwide, up to his recent Millennium hit, ‘Mi-Loony-Um’ with its up-to-the minute modem melodies. His international fan base has flowered from country-wide to world-wide in the last ten years, since his humble beginnings at Youth’s Butterfly Studios in Brixton, this year alone he has played over 16 sell out gigs around the world, each with a capacity of over 1500 people, in Australia, Israel, New York, Pittursburg, San Francisco, Los Angeles, Moscow, Geneva, Montreal, Tokyo to name just a few. In Tokyo he has received a lot of TV and press coverage for their ambient project, ‘Shpongle’ which has intrigued the Japanese audience with its international blend of traditional world music and modern musical mastery.
Raja Ram, is the innovative sonic co-pilot producing alongside Simon and providing inspirational artwork for the album covers and the website as well as his unmistakable flute solo’s in C Major. A founding member of the band Quintessence in the sixties Raja has many years of band experience in the music industry. Not only a band member but also the creator of TIP Records along with their infamous party sound and energy, he is not only a brilliant flautist but the inspirational man behind the ‘Shpongle’ concept.
Shpongle has been a working project since the release of the first album in 1998 filtered out into the underground in which Twisted Records is so renown for its dance music, having sold 30,000 copies without any noticeable press coverage Simon and Raja are now ready to hit the world with their unique sound and have been on a mission to express themselves since finishing the album over the winter, Raja has been playing a series of 16 parties in Brazil as well as tours in Japan and Simon playing all across the globe including his recent appearance in Tokyo. Now finally the UK has a chance to catch up on this worldwide phenomena with the forthcoming release of their second album, ‘Tales of the Inexpressible’ with its further explorations into diverse sound production they are ready to unleash the multiversity that is ‘SHPONGLE’.