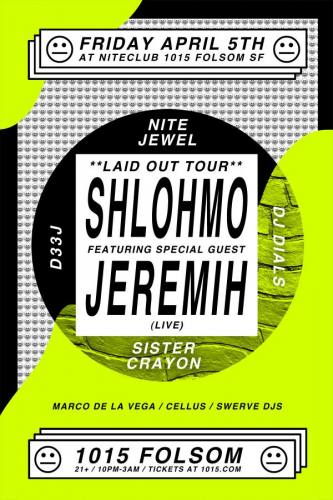 
From the first glimpses of Henry Laufer’s work as Shlohmo, it was clear that the LA native and visual artist turned self-taught musician was onto something. With an effortless grasp on sound design, Laufer combines deceptively simple and emotive melodies, subtle bass drops and swinging slow motion drums.


His early work has placed him at the forefront of a new wave of rising talent amongst west coast producers.Inspired by the desire to write songs and create a release of full-range instrumentation and vocals all his own, Laufer promptly began home-recording ‘Bad Vibes’, his proper full-length debut album for the Friends of Friends label.


Some might say the songs on ‘Bad Vibes’ represent the spawn of a new “rhythm and blues” – one that swings and sways under the backbone of Henry’s own take on modern electronic music. Augmented with delicate slide guitar playing, homemade synth sounds and lilting, tuneful melodies, Shlohmo’s latest output is one that will take you places – specifically the un-paralleled vibes swirling through this young man’s head.