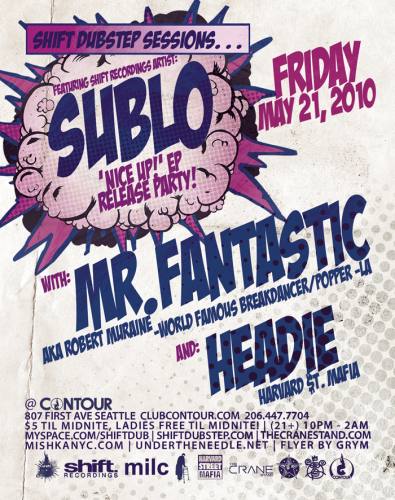 Shift.
Dubstep Sessions
w/
SUBLO [Shift Recordings]-SEA
'NICE UP' EP Release Party!
MR. FANTASTIC [milc/cirque du soleil]-LA
You may of seen him on So You Think You Can Dance
HEADIE [H$M]-SEA
@ Contour
807 FIRST AVE SEATTLE CLUBCONTOUR.COM 206.447.7704
$5 TIL MIDNIGHT / LADIES FREE TIL MIDNITE! $10 AFTER
(21+)10PM-2AM
CHECK OUT OUR SPONSORS!!!
THE BEST DEEJAY LAPTOP STAND!
WWW.THECRANESTAND.COM
THE FRESHEST GEAR!
WWW.MISHKANYC.COM
THE SICKEST TATTOOS IN SEATTLE!
WWW.UNDERTHENEEDLE.NET
FROM THIS WEEK'S STRANGER NEWSPAPER!
Data Breaker by Dave Segal
Seattle DJ/producer Sublo has been making strides in the area's burgeoning dubstep scene, playing numerous gigs with some of the genre's heavy touring acts. Now he's dropping his debut release on May 21 for DJ Lukki's local Shift Recordings label, a five-track EP titled Nice Up!
An absurdly dramatic fanfare announces "Shook," which then evolves into a stolid, bleak steamroller of badassitude. More high/low shadowboxing occurs with the frequencies, squeezing out anything midrange-y in the process. This quickly leads into "Helltown," whose periodic dropouts reveal a preponderance of bleepy and chirpy Nintendo-rooni synth effects that lend stark contrast to its crushing, ominous low end. The record continues with the brief "Breeze" and immediately plunges you into some highly pressurized bass wobble that grounds a lackadaisical skank. "Jumper" peddles disorienting bass and treble tones in a track that bears incredible torque and bruising beats that punch unpredictably at your gut. One can imagine this track scoring a slow-motion fight scene in a kung-fu flick. "Toll" aptly begins with bell tones and then lead-footedly marches with the solemnity of a condemned man into a sludgy, sci-fi-aura'd landscape.
Nice Up! isn't the most groundbreaking dubstep material around by any means, but it's a solid debut abounding with cinematic atmospheres, street toughness, and crisp production touches. 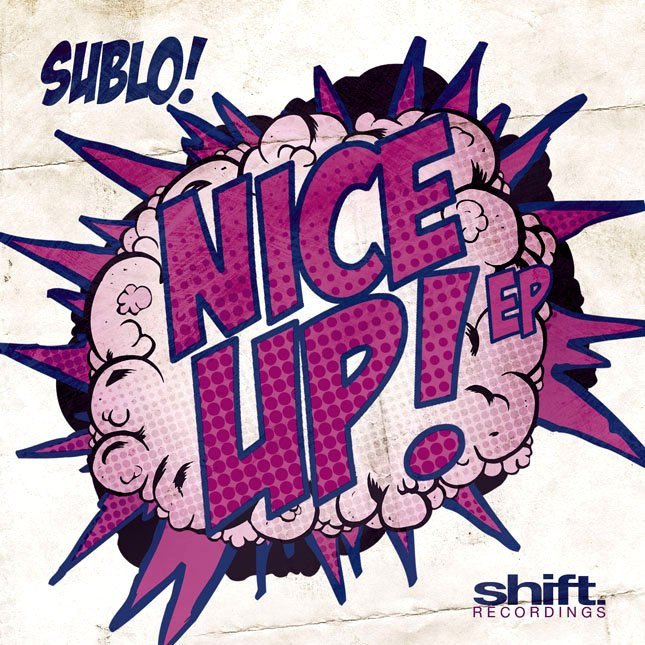