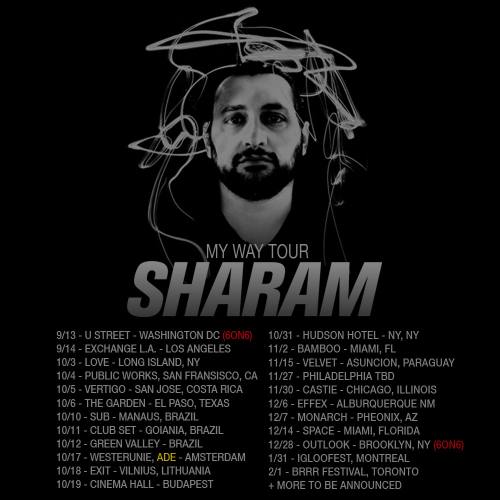 “There’s a presence about Sharam that comes through in his music as well as his shows. Like any great relationship, you leave his show feeling as if you’re a better person… the Sharam experience.” - PLAYBACK:stl

One of only few dance acts who can effortlessly navigate between the nocturnal world of dance music with underground gems like “Crazi”, “Texi” and "Don't Say A Word" while scoring Top 20 Hits internationally with “PATT (Party All The Time)”, “The One” feat. Daniel Bedingfield, and “She Came Along” with Kid Cudi. His desire to not ever be confined and pigeon holed into one genre of music has enabled him to constantly evolve and surprise people with his productions.

The Grammy Award winning producer’s DJ sets follow the diversity of his productions skills. On one side he rocks a marathon underground set like his legendary 10 hour stint at Warung Beach Club in Brazil to a sold out crowd of 4000 (2 hours of Sharam’s seminal live set was featured on his 2011 Essential Mix on BBC’s Radio 1), and on the other side he can effortlessly entertain a diverse crowd of younger dance enthusiasts and VIPs in Vegas, Miami and Ibiza with a penchant for quality music that’s engaging and entertaining, without compromising his art as a forward thinking DJ/Producer.

Already beyond well known for his role as part of the legendary DJ duo Deep Dish which brought the world huge hits like "Flashdance" and "Say Hello", he is also the driving force behind the legendary Yoshitoshi record label using it as a vehicle to promote newly discovered talent from around the world.

None of this would matter unless Sharam’s music connected with people which it clearly does year after year in the world’s largest music venues and radio stations around the world, while dance music purists continue to go crazy for his musical choice and mixing technique.