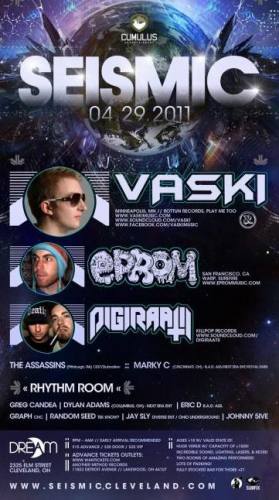 
Rottun Records, Play me Too


When DJ/Producer Vaski sent his demo to Rottun manager Excision, he had no idea of the journey that he was beginning. With his first two tracks storming the beatport top ten charts, Vaski hit the studio, returning to his Electro House production roots for the massive Terror Dome EP, featuring the self-titled track as well as the hit single &quot;You Wouldn't Understand,&quot; Peaking again in the top ten of dubstep on Beatport. Vaski's productions and local DJ sets began to gain attention of international promoters and DJ's. Vaski spent the next season DJing at many Twin Cities venues, playing at the famed First Ave, Dinkytowner, and The Loft all the while working on his next work. World on Fire EP shook not only the Beatport charts but the entire dubstep community. All five tracks peaked in the top 25 in dubstep on Beatport, two tracks in the top ten, and the famous &quot;Get Down&quot; claiming its rightful place as a number one hit. This massive release rocketed Vaski to where he is today: smashing through his international tour, gaining rapid popularity for his unconventional stage presence, and continuously producing ridiculous and catchy bass lines. On the horizon for Vaski is the continuation of his tour, and his biggest production to date.


A savage synth wizard and mad beat scientist who brings bass to life, Eprom infuses his music with such raw energy, sense of movement and love of the bounce that it almost becomes human. Named over and over by other top West Coast producers as an influence and inspiration, this respected San Francisco-based artist is making a profound impact on the evolution of modern sound.


Fusing psychedelic space machine murderation, polytemponic neurocrunk and heavy-handed pleasure, Eprom creates obese ogres of bass. His mutated music is so full and rounded that it is holographic; such a massive sound requires multiple dimensions to fully express its brilliant colors and diversely accumulated weight.


Hip hop and electronic music are colliding in an exciting sonic apocalypse, and Eprom is a master of this slower yet very danceable style that has caught the ears, hearts and feet of a whole new generation of beat lovers. His sound combines a laid-back lean with forward-moving energy, reflecting the feeling of the Left Coast and resulting in a rare breed of experimental music- one that puts the dance floor first.


And dance floors don’t just like Eprom’s low frequency focus and live sound manipulation– they go absolutely delirious over his unique splash-stomping style. Like a sonic pimp with a bent brain, he slings disturbingly crunchy beat monsters, fresh and fun but never overly mashed up. Eprom’s distinctly dirty sound can be found all over the electronic universe, and his beats are just as likely to be heard in mixes by dance music’s biggest names, dropped by local DJs in dive bars, echoing across frothy outdoor festivals or pounding on the edge of a cliff in outer space where a dance floor’s dreams are coming true.


Eprom’s collaborations with the Glitch Mob’s Boreta as Nasty Ways and with Mozaic as Hookerz N Blow have also been met with mad love from the underground, and he has released music on several domestic and international labels including Cloak X Dagger, Surefire, Black Acre, Rwina and Bad Acid, as well as a recent 12” with Eskmo on the groundbreaking label Warp.


Fans and supporters of Eprom include Flying Lotus, Starkey, Rusko, Jakes, Rustie, Megasoid, The Gaslamp Killer, Megasoid, The Glitch Mob and BBC Radio One’s Mary Anne Hobbs, and the producer has shared the stage with many of the international electronic music community’s hottest artists. With four new 12” out just in 2010, Eprom is finally getting the recognition he has earned as an integral part of the giant bouncing backbone of West Coast Sound.


DIGIRAATII emerged onto the electronic music scene, in early 2009, not with a bang but with a sonic boom. Establishing themselves, from the start, as electronic music’s own “digital elite” or digerati. They quickly made a name for themselves by causing a near panic every time they hit the decks, equipped with their throbbing bass lines and frantic melodies. Fueled by hype generated from their two-time, number one position on Hype Machine (Yeah Yeah Yeahs - Heads Will Roll DIGIRAATII remix) as well as a recent feature on the Mishka Blog, DIGIRAATII began tearing down clubs all over the country with a live performance more akin to a hard- core punk show than an electronic act, they take you on a journey from 130 to 175 Beats Per Minute with effortless transitions and enough double-drops to make your head spin. For the DIGIRAATII boys, no genre (or level of debauchery for that matter) is off limits.&nbsp;&nbsp;It is thisincredible versatility that makes DIGIRAATII first on the list of performers sought after to help pack a dance floor and cause a frenzy. Having shared the stage with everyone from Dubstep’s dark lords Deathface and Datsik, to electro pop phenoms Designer Drugs, Data, and Frankmusik.


In 2010, DIGIRAATII, now a two-man operation (Zucco and Young), was signed to Killpop Records by West Coast tastemaker/So Sweet Records Cofounder Eli Smith, and UK BillboardTop 100 Electropop superstar, Frankmusik. Immediately following the signing, they embarked on a multi-city West Coast tour featuring dates in Los Angeles alongside Major Lazer at Avalon/Bardot, as well as Florentine Gardens, and even making a stop to tear down Steve Aoki’s famed Dim Mak Tuesday’s.


Currently they are putting the finishing touches on their debut EP, “Drop City,” slated for release on Beatport, iTunes, and other Internet retailers in December, as well as working on commissioned remixes for CrystalVision and Frankmusik amongst others. Armed to the teeth with an arsenal of fresh heaters, and even more original production in the pipeline, it appears that these two Midwest party monsters are about to permanently make their mark on the EDM community, and do some major damage to the nightclubs all over the world, unfortunate enough to host them and their wildly inappropriate antics on a nightly basis.&nbsp;&nbsp;


Influenced by everything from Drum &amp; Bass to Indie Dance Rock, their production style is every bit as heavy as it is melodic, working sounds from all over the EDM spectrum into one concise dance-floor slaughtering package. They've landed on a very detailed, intricate, and heavily layered brand of Electro, a far cry from the “Bangers” on which they first made their mark. Recently, they’ve incorporated the musical stylings of Electro House, Dubstep and Drum &amp; Bass into their own massive, big room, super-genre. However, if you choose to classify it, one thing is for certain, the sound is heavy, infectious, and refreshing in a market overly saturated with unimaginative and unexciting production.