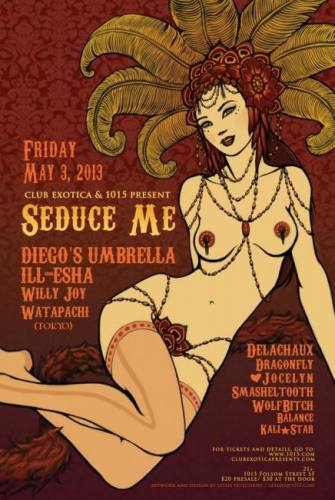 
There are two kinds of people in this world: those who love Diego's Umbrella and those who soon will.


Celebrated as San Francisco's Ambassadors of Gypsy Rock, these world renowned entertainers have created an irresistible cocktail that is entirely their own. On a planet bombarded with every possible kind of entertainment, a Diego's Umbrella show is a singular, ecstatic experience; one concert is all it takes to turn you into a believer. Night after night they effortlessly blend marching drums, harmonized shredding and gang choruses with showmanship that has all the fire and unpredictability of youth, coupled with the refinement of years of experience on the road. The group's uncanny gift for pleasing crowds, from standard clubs to huge festivals such as High Sierra and Outside Lands, has earned them a breathless and ever-expanding following across the United States and Europe, and that connection with other cultures continues to inform their aesthetic. In their music you will hear klezmer, flamenco and punk rock all blended to pop perfection.


Diego's Umbrella's fourth album; Proper Cowboy, released in July of 2012, marks a first time collaboration with San Francisco producers The Rondo Brothers (MC Lars, Foster the People). The union has resulted in a captivating new spin on the world that the band has created; the reverb-soaked guitars and gypsy fiddles have been augmented by an army of tubas, analog synths and soaring vocals in what they are calling a "futuristic Spaghetti-Western soundtrack." D.U. attributes much of the album's extraordinary character to their decision to cover a 1972 Sonny and Cher gem, "A Cowboy's Work is Never Done." The song's soundscape of Ennio Morricone guitars, horns and percussion woven with modern electronic beats set the stage for the entire album. Among the other highlights, the single "Big Star" finds the band picking up where they left off with their 2009;Double Pantherfavorite, "Kings of Vibration," complete with a shared verse vocal and enhanced by a chorus that flies higher than anything they've done before. And the exuberant "Bulletproof Shine" finds the group joined by Angelo Moore, legendary leader of Fishbone, who adds his pipes (and his theremin) to the festivities.


Proper Cowboy; is Diego's Umbrella's most fully realized vision to date, the culmination of years of dedication to the craft of songwriting and to their audience. It tips its hat to to the raucus dance parties the band played in their early days in Croatia, but is as quintisentially American as Rock and Roll itself, giving true meaning to album's namesake.