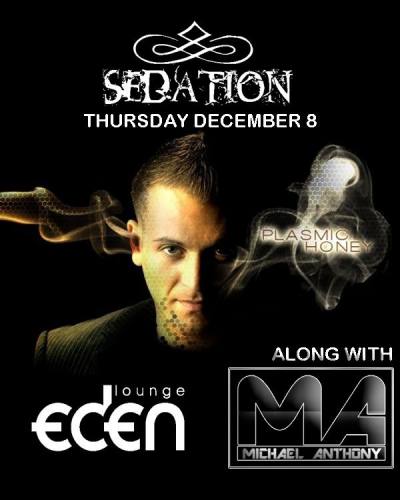 What: Sedation Thursdays with Plasmic Honey and Michael Anthony AN ALL NEW SEASON OF INDUSTRY THURSDAYS!

ENTER TO WIN A FREE BOTTLE OF GREY GOOSE BY LIKING US ON FACEBOOK!

Michael's DJ sets, & more importantly production work really speak for itself. A very original and raw sound he has; that ranges from the deepest and sexiest to the hardest hitting techno and drums. His sound is very raw; inspired by some of his favorite djs (Luciano, DT, Loco Dice, Richie Hawtin, Marco Carola, and Chris Leibing to name a few), so you can be sure to expect the unexpected with tons of rare acapellas, private edits, and nothing but the best in house music's past, present, and future.

Having opened/closed for seasoned jocks such as DJ Vibe, Steve Lawler, Danny Tenaglia, Boris, Peter Bailey, Jonathan Peters, Nicole Moudaber, Chriss Vargas, and Chris Moody; and with vibe and high energy sets and at Pacha (NY) Cielo (NY), System (NYC), Phuket (NYC) The Shelborne Pool (Miami), Karu & Y (Miami), Nocturnal (Miami), as well as a slew of other one stops, MA has certainly proven he can rock any dance floor at anytime.

Plasmic Honey's deep dive into the world of production was a result of listening and learning from the club scene's best. He began crafting his music in the early 1990s while listening to the sounds of Victor Calderone,Junior Vasquez and Deep Dish. It was in 1999 that Plasmic Honey was born and Basile's first record was released. He created the smash NY underground hits "Take Me to the Top", "Ride the Trip" which was first debuted by world renown Calderone at New York's Roxy. Plasmic Honey would take the seat at the head of his class as he continued to create big room records such as "Africa", "We were In the Dark" & "Dream Drums" while tapping into the New York remix market. Plasmic Honey would never look back. His ability to master the art of the remix has undoubtedly placed Plasmic Honey on stand-alone platform as his records continue to encompass outstanding music selection and incredible programming skills,.

CHECK OUT THE SEDATION PODCAST ON ITUNES BY LOOKING UP BIOHAZARD PROMOTIONS!