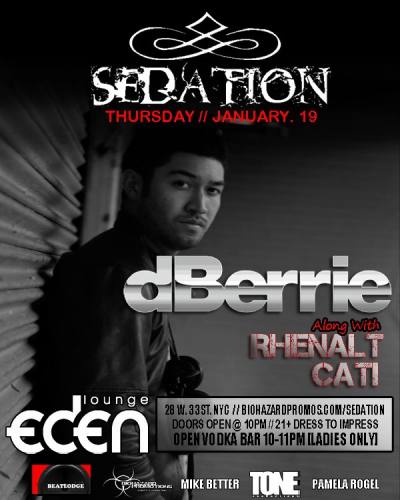 What: Sedation Thursdays with David Berrie

From Diddy to the underground, David Berrie's musical career has evolved in unique fashion. The one-time deejay to the stars, twenty-four year old Berrie now looks to carry dance music in New York into the next decade.

With a distinctive deejaying and production style, Berrie draws heavily on both tech and progressive house influences. His recent debut release, "Underslang", reached #25 on the Beatport Top 100 and #3 on Beatport's Tech House chart. Upcoming releases on Ultra Records, Nervous Records, and Starter Records look to add to the considerable buzz Berrie has generated on house blogs around the globe. Remixes of Chris Brown's "Yeah 3X", released by Jive Records, and Adele's "Rolling In The Deep", both produced under the moniker dBerrie, have become staples of deejays' sets worldwide.

Berrie continues to tour globally, holding residencies at Pacha (New York), Liv (Miami), Glow (DC), and Playhouse (Los Angeles). He has performed at a bevy of international festivals including Planetlove WKD Festival (Ireland) and Umagination (Croatia) and has headlined Dayglow throughout the United States.

To make reservations go to: http://www.biohazardpromos.com/tables