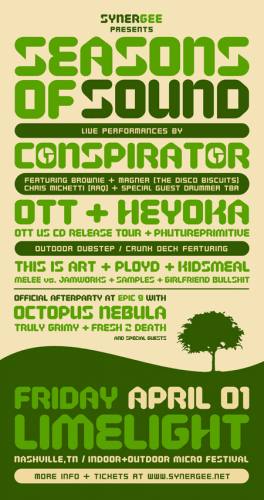 What: Seasons Of Sound

Get your SUPER EARLY BIRD CHEAP tickets to Seasons of Sound here: http://seasonsofsound.eventbrite.com/

SynerGee Ent.Presents The most Bitchin' show of the Spring:

Seasons of Sound - Spring 2011 edition. Guaranteed to Blow your mind. Over 11 hours of straight music. 3 stages. 2 Venues. One City. One Love. The best producers and most talented musicians from across the gl...obe will grace Music City with their electronic mastery and instrumental virtuosity combined with tons of sound and some new lights that are guaranteed to blow your mind and the roof off the LimelightGet your SUPER EARLY BIRD CHEAP tickets to Seasons of Sound here: http://seasonsofsound.eventbrite.com/

SynerGee Ent.Presents The most Bitchin' show of the Spring:

Seasons of Sound - Spring 2011 edition. Guaranteed to Blow your mind. Over 11 hours of straight music. 3 stages. 2 Venues. One City. One Love. The best producers and most talented musicians from across the gl...obe will grace Music City with their electronic mastery and instrumental virtuosity combined with tons of sound and some new lights that are guaranteed to blow your mind and the roof off the Limelight.

This will be the best party of spring. Nashville and the Southeast, get on it. Spread the word, this night we're gonna BLOW IT ALL UP!

Conspirator, the duo of Disco Biscuits’ staples Marc Brownstein and Aron Magner which often features guest musicians in the live setting, has announced a national tour of “full band” performances featuring Chris Michetti(RAQ) and a rotating cast of first-class drummers. The news comes on the heels of a series of performances that have created quite a bit of buzz among band and fans, alike.

While Marc and Aron have occasionally invited other musicians to their live shows, the “new Conspirator” has proven to be a new, “full band” sound emerging not only from the group’s mentality, but by featuring a solidified, returning, 4-piece lineup.

Live music fans have come to embrace Conspirator for their signature high energy, electronic-based sets and their legendary album, The Key, which has been a staple of the band’s live repertoire for years. Now, with a firmly set 4-piece band, fans can expect performances featuring increased live improv and a refreshing musical flow, peppered with some surprises. Inspired by new collaborations and the combined musical histories of the performers, Conspirator is set to get the scene talking in 2011.

Known throughout the live music world for high energy, creative guitar shredding with his band RAQ, Chris Michetti became much more familiar to Disco Biscuits fans throughout 2010 when he periodically accompanied the band on stage at places like Red Rocks, Camp Bisco, and on a number of Spring Tour performances. Michetti recently lent his signature handiwork to Conspirator during performances earlier this December, and anyone who caught the early phases of the “new Conspirator” will undeniably be psyched for round two and beyond.

{with Adam Deitch on Drums]

Ott's music is a world to it's own, a pure undiluted atmospheric world of swirling stoned sound and colour. Indian to Arabic to African Ott's dub's are boundary-less and boundless in their scope and strength. Ott's music is a paradox of dub, not stereotypically slow heavy sounds but at once an upbeat dancey dub full of light, world chants and funky beats, while still maintaining a slow and relaxed ambient groove. Blumenkraft is a selection of clean hard grooves and the best dub studio skills, echo, delay, phasing, instruments popping up out of the murk and then submerging again, particular skills of which Ott is a maestro.

Ott's BRAND NEW album, following Skylon and Blumenkraft is to b released prior to this upcoming official US CD release tour.

Heyoka AKA Andrei Olenev is a cosmic auditory scientist found in the Bay Area noosphere, who has been blowing minds with his sonic manipulations. His early influences in Downtempo, Dub and IDM combined with mid-tempo dancefloor genres have helped create a very unique sound that combines relentless basslines, hip hop rhythms, dub vibes, and musicality and melody, all within an atmosphere of heavy psychedelia and alien dimensions.The response to his emergence so far has been overwhelming with Heyoka developing audiences and playing festivals from US to Canada and Australia. For a mind bending experience in dub inspired Glitch Hop, keep your ear to the ground for Heyoka playing a city or festival near you.

This is ART features the live musical performance of Art Webb on bass guitar and live electronics. A self-taught bassist and multi-genre producer from Nashville, TN, ART unleashes raw musical creativity in the form of improvised deep sub-bass lines, broken break-beats, and spine-melting synth melodies over an array of self-recorded samples and stereophonic soundscapes. The result is a distinctively rich sound, complete with melodic tones and organic structures while paying direct homage to the true forms of undergroHipund street music.

Phutureprimitive is the moniker of Northwest producer and song writer Rain. Early childhood photos reveal Rain sitting at the piano plinking keys, grinning from ear to ear…..a true sign of things to come. Continuing his early fascination with music, Rain was later drawn to electronic music, inspired by its ability to combine the best of organically played instruments and the synthetic pleasures of sounds more exotic to the human ear. After beginning a DJ career in the 90s, Rain began incorporating the music he was making in his home studio into his DJ sets. That was all it took to trigger a full blown love affair with electronic music and the process of its creation.....and PhuturePrimitive was born.

Last visit Rain tore up a Live Band set with Eoto. This time get ready for a new rowdy solo psychedelic explosion!

As a band, Octopus Nebula seeks to create the kind of deep, multi-layered, psychedelic grooves that we, as individuals, have constantly sought but seldom found on our own musical journeys. Our writing is intended to convey the sound and emotion of a place... an experience... a time... It embraces many genres of music, conveying the essence of all without being a literal interpretation of any. In this process, we make a conscious effort to avoid the standard musical forms that have been exploited by so many other bands... no well worn blues, rock or pop formulas and no boring techno beats our listeners have heard a thousand times over. Instead of leading people by the hand through what they already know, we leave it to the individual to conjure up their own imagery, emotions, and experiences.

Fresh2Death is the live musical collaboration of DJs Fisk and Samples. The live remix, dual-laptop performance brings a hyper-active element that is missing in a standard dj performance.

The band was formed in mid-January 2009, but Fisk and Samples have a combined 12 years of DJ experience. Come to a Fresh2Death show to hear the emerging sound of Glitch Hop, where Fisk & Samples are at the forefront of the beginning of a new genre.

Meleé comes from a DnB background, and has over decade of DJing experience. He is notorious for his seamless and creative mixing ability, fusing multiple phonic elements into a glorious one. His enthusiasm for turntablism is refreshing in an ...era over-saturated by midi-controllers and laptops. His fidelity for sub-bass has naturally led him into the Dubstep realm, where he been schooling newcomers with his sonic aptitude and ingenuity.

Jamwerks is always eager to delve into the womp aesthetics of the rapidly evolving steppers scene. His tracks are sure to please dubstep lovers from all camps with its dancefloor energy and aural depth. He is equally earnest to satisfy his alter-ego Karma Koma, dedicated to expressing his left-field sensibilities, sure to include the butterflies within a framework of beats and bass-line; digging deep for tracks the evoke the emotive beauty and sonic bliss of a poetic day-dreamer.

Ben Samples is one half of the live remix project Fresh2Death that is based out of Denver, CO. His style is crunk glitch-hop, complete with bass-heavy remixes of your favorite club anthems and hip hop. His professional DJ career started in 2006 when he picked up a weekly variety radio show for CU Boulder's KVCU. His show covered many genres, with a focus on dance music and hip hop. Now, Samples blends both hip hop and dance music into a hybrid club hip hop sound that is redefining the bassline genre. Samples is a member of the Denver Bass Squad, which is the essential crew that pushes the heavy bass scene in the Colorado area. and the other half of Fresh 2 Death....greg Fisk aka...... 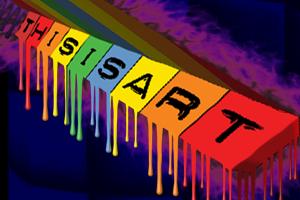