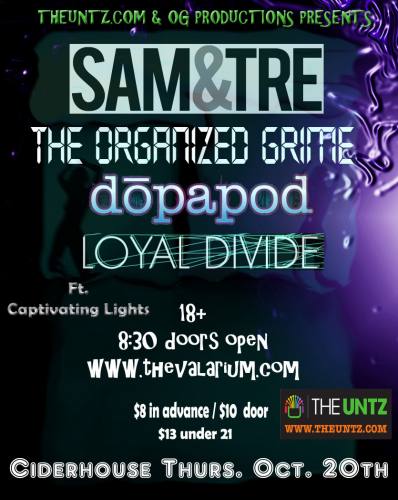 What: SAM & TRE with THE ORGANIZED GRIME, DOPAPOD, LOYAL DIVIDE

After being introduced during a 2008 recording session in Nashville, Sam & Tre decided to collaborate and see what happened. After two straight years of relentless recording, experimentation and bonding, their unique brand of Electro Glitch Hip Hop was born. With roots in Hip Hop, Dub, Rock and various genre influences, their unique group represents their respective upbringings in London, Atlanta and Trenton, Tennessee, while still keeping an international sensibility.

In late 2010, the release of their underground anthem, "We Do", hit the streets and spread like a bubonic plague. They soon were garnered with praise for their groundbreaking sound, cultivated by the accomplished mad-scientist producer Sam Shacklock, and lyrical originality of rapper Tre Easley. This was soon followed by the release of their critically acclaimed self-titled debut, which soon reached thousands of downloads and modest international attention.

Already in the process of recording their follow-up album, Sam & Tre are looking to once again push the limits of their unique creative sound.

Boston has long been renowned for its fertile music scene that has sprouted world-class musicians within its musically diverse landscape. One of the most promising seeds to germinate out of the area is Dopapod. Bringing together players from each time zone in the US, the quartet has been thumping up from basement parties all over the Northeast, to bumping the sound systems of major venues all across the east coast. At face value, their sound can be described as a funktronic dance party, but if you dive in a little deeper it’s easy to uncover the unique genre-bending blend of funk, jazz, trance, soul, afro-beat, and prog rock.

In the course of only three years, Dopapod has already put the bug in music fan’s ears from the top of Vermont down to the tip of the Florida Keys. Covering all that ground has seen the young, but very seasoned group return to areas all over the east coast and landed them spots at numerous festivals including Camp Bisco, Mountain Jam, StrangeCreek, The Big Up, The Getdown, and The Big Up. Their electric live showcase has been conjuring up a fast growing, loyal fan base, and seen them share bills with artists like Lotus, Sam Kininger (Soulive, Lettuce), Brothers Past, Biodiesel, and Dave Grippo (Trey Anastasio).

Their debut album, Radar, explores the vast spectrum of Dopapod’s sound and features guest appearances by Timo Shanko (G-Love and Special Sauce), Dana Colley (Morphine), and Mr. Rourke (Club D’elf). Performer Magazine has dubbed their first offering as “setting the bar respectfully high”. As Dopapod rounds out the year with a Fall east coast tour, 2011 is shaping up to be very promising and productive. The band plans to hit the studio to record and release their sophomore effort, and more tours are in the works and sure to keep things exciting.

Loyal Divide is an experimental pop/rock band from Chicago, IL. The band's sound grafts tight-locked grooves upon broad strokes of psychedelic pop; a style which, if once derivative, has developed into something both accessible and triumphantly original. Truly a live act, the band performs with enthusiasm and energy delivered in the most genuine fashion. Their brand of psychedelic funk is said to defy description, drawing in those who favor variety to continuity.