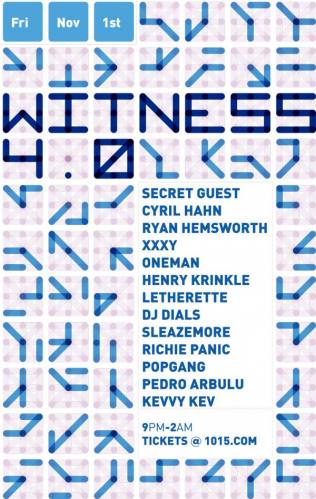 Witness, the highly curated dance event, celebrates its fourth inception after a sold out show with Hudson Mohawke and Cashmere Cat.

This Friday, November 1st, prepare to witness Cyril Hahn, Ryan Hemsworth and 5 other headline acts take over all 5 rooms of the legendary 1015 Folsom. Cyril Hahn, a young house and techno producer, plays his second show in SF- previously selling out the Mezzanine withLights Down Low. WeDidIt wonder-kid Ryan Hemsworth, co-headlines presenting his unique take on rap beats and 90s nostalgia. Rounding out the bill is the young mysterious Henry Krinkle, who's mega hit "Stay" has seen over 15 MILLION plays on YouTube. Then see UK based house producer xxxy rock the dancefloor with deep, driving vibes.

But wait! There's always more to a Witness show! Dj Oneman- probably one of the illest and most sought after selectors in the world will be piecing the night together. Rounding out the top of the bill is the SF premier of Ninja Tune's very own Letherette- playing the beat heavy, hip hop infused future music you've been waiting for.

Last but not least, we've a special guest hosting the night…. It's a big Witness and we are excited for you to experience it!