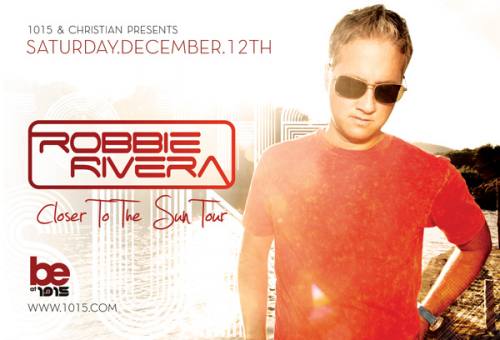 What: ROBBIE RIVERA - Closer to the Sun Tour

MAIN ROOM...
Robbie Rivera
An unashamed workaholic, when Robbie’s not traveling or remixing, he is locked in either his Spanish or US studio, infusing the sounds he hears on his travels. But the jewel in his crown as most know is his label. Juicy Music is a familiar name to most DJs. Recognized for its quality house, progressive and electro music releases. His own brainchild Juicy Music’s arsenal includes Antoine Clamaran, Coburn Superchumbo, Mark Knight, David Guetta, Steve Angello, Sebastian Ingrosso, Stonebridge and emerging talent such as Willie Morales, Paul Harris, Louie Padilla, and Rooster & Peralta.
But there’s more. Since 2005 Robbie Rivera has been the driving force behind the famous Juicy Beach at the Winter Music Conference. The 17 hour events at Nikki Beach attract a cast of over 6500 clubbers and A-List DJs and have become one of the week's biggest parties. Summer 2008 saw the third season of the Juicy Ibiza parties which welcomed up to 6,000 clubbers to the Amnesia's beautiful terrace throughout the season. The Juicy brand is expanding to new territories including Spain, New York, Los Angeles, the UK, Chicago and new locations will follow soon.
Consistently innovating world class music is what sets him apart from the pack as a true artist and it is no surprise that Robbie Rivera is now racing to the forefront of the genre. He is currently working on a new album for 2009 and prepares a massive world tour. Voted Third Best House Producer in the Beatport 2008 and Best Remixer in the 2008 IDMA WMC Awards, their is no doubt that international music producer Robbie Rivera is already one of 2009’s hottest properties. Robbie is clear about his future plans: “More music, period!”
DJ Taj
VAHID
KEVIN KIND
MICHAEL ANTHONY
ROB BISHOP
JARED-F
FUNK SHUI
NAUGHTY J
& JJ AGUILAR