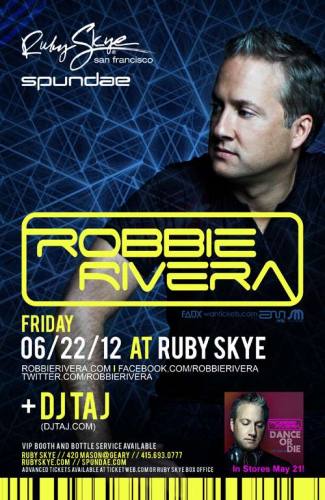 Following early releases on Subliminal, Filtered and a host of other key dance labels a few years back, Robbie Rivera has since been inundated with offers and has worked with, and had tracks released on labels that include Defected, Serious, Azuli, Duty Free, Positiva, Ministry of Sound, Credence, Echo, Virgin, Atlantic, Strictly Rhythm, Multiply, Tommy Boy, Manifesto, Ministry Of Sound, Time, Sony, Mute, Universal, Epic... etc.

In March 2000, Robbie’s infectious piano track ‘Bang’ turned out to be one of the most in demand tracks at the Winter Music Conference in Miami.

The hugely successful Time Records picked up the rights for Europe, and Multiply winning the race for the domestic license. ‘Bang’ made Number One in every UK Dance chart, shot onto the Radio One, Kiss FM, and Capital playlists (as well as all key regional stations), was a Danny Rampling Powerplay record and picked up huge support from the likes of Dave Pearce, Judge Jules and Pete Tong.

Dozens of features and excellent reviews appeared across the UK press from Music Week through to 7 (Essential House Tune), DJ (Recommended, In The Box), Mixmag (Big Tunes), M8, Ministry, Wax, I-DJ, The Mirror, and even TOTP magazine! ‘Bang’ was also play listed by The Box and MTV, and added to almost every major compilation album; the single eventually reached the top 15 in the CIN Chart following its release in August 2002.

After continuous airplay (as much on Radio One as Spiller and Robbie Williams) ‘Bang’ was also used throughout the Sydney Olympics and re-entered the national UK chart due to the increased demand, suddenly everyone knew the name Robbie Rivera.

Since then, Robbie's been working away on a host of releases under various guises as well as several new releases on his JUICY MUSIC label. The hugely original ‘Feel This’ followed and was picked up by Strictly Rhythm after having had the full support of Danny Tenaglia out in Miami and Ibiza 2001. ‘Feel This’ reached Number One in the US Billboard Club Chart.