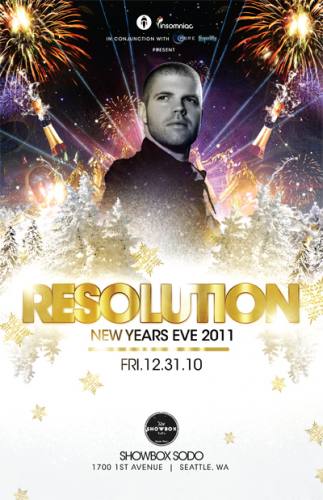 in conjunction with pure & liquify

This New Years Eve revel in the decadence of a fantastic occasion that will set the precedence for all parties of 2011.

For ONE night only Showbox Sodo will be transformed into a WINTER WONDERLAND that will take your breath away.

Enjoy a champagne toast with us and usher in a New Year in a way you will never forget. Make this the place you make your RESOLUTION.

With over 110 remixes to his name—including tracks by Madonna ("Miles Away"), Katy Perry ("I Kissed A Girl"), Tegan & Sara ("Back In Your Head"), and La Roux ("Bulletproof")—Morgan Page has earned a solid reputation for transferring insatiable pop energy to the dance floor in the form of banging, progressive house tracks. High ranking spots on iTunes' dance chart, Beatport's progressive chart, and Billboard's club charts affirmed his salability, while an '09 Grammy nomination for Deadmau5's remix of Page's "The Longest Road" simultaneously bolstered his underground cred while spotlighting his skills as a songwriter.

Page released his first official full-length album in 2008. Entitled Elevate, it featured remixes of music by The Submarines, Dengue Fever, Nelly Furtado, Delerium, and others, along with a small handful of Page's originals. It was the perfect calling card for a producer well steeped in vocal re-rubs, but eager to imprint his own unique mark upon dance music.

"Believe took a year and a half to make, but it was worth it!" says Page. "I went to great lengths to make songs I felt will last a long time, and to create an album you want to listen all the way through. It's easily my best work so far."

As a college student and mix show radio DJ in Burlington, Vermont, Page learned to navigate the space between pop music's accessibility and the heady minimalism of progressive house early on. At the age of 18 he was nominated for Boston Music Award, and early in his career produced a remix of "Angels," a track by seminal trip-hop band Wax Poetic, featuring the vocals of one Norah Jones. The dance community was quick to catch on, and his first instrumental tracks were signed to taste-making imprints like John Digweed's Bedrock, Satoshi Tomiie's Saw Recordings, and James Zabiela's Hearing Aid. In 2003, he made the move to Los Angeles.

"I was juggling remixes with a day job, then brewing coffee at midnight," says Page, "burning the candle at both ends and saving money so I could write music full-time."

The landscape dramatically shifted for Page when he released a now infamous collection of bootleg remixes in 2005 entitled Cease And Desist. Without the help of master tapes (or label permission) he extracted a cappellas and signature melodies from tracks by David Bowie, Coldplay, Imogen Heap, Esthero, and The Kills with surgical precision, then rounded out the sound with luminous instrumentation and blazing beats. His undulating progressive feel and strict attention to kit detail—never the same kick drum twice, ever—was a perfect compliment to the larger than life vocal hooks. Dance music blogs like Resident Advisor and Beatportal took note, and Page's own server continually crashed under the weight of the mix's download traffic.

"It was like going to boot camp," says Page of the arduous process behind creating Cease And Desist. "It was a great way of getting good at editing with limited resources, and it got out to so many people. You just didn't know who was listening to it."

Everyone from DJs and producers to managers, agents, and of course fans got their hands on the album, and its underground success helped pave the way for music future placements in television shows like Samantha Who? and Melrose Place, as well as cutting edge campaigns and in-stores for Bebe, Chanel, and Sephora. With his resume and repertoire quickly expanding, Page struck again with the release of Elevate, an album that KCRW DJ and electronic music pundit Jason Bentley described as "a breakthrough collection of original music and remixes" full of "subtle electronics and thoughtful songs." Jo-Anne Greene from All Music Guide was even more forthright in her praise, referring to Page as "a man fast becoming a legend."

Having long jettisoned his status as an up-and-comer, Page is ready to step into the next phase of his career, firmly joining the ranks of established "triple threat" DJs, producers, and remixers like Kaskade, Deadmau5, and Eric Prydz. It's no surprise that the dance music scene is already buzzing about Believe.

"Fight For You" is the album's first single, and is already being supported by world class DJs like Tiësto, Armin van Buuren, Above and Beyond, Dave Dresden, and Hernan Cattaneo. Bolstered with impassioned lyrics and swift, clean guitars, the track embodies Believe's fragile yet faithful feel, pushing through wistful cinematic shades to the promise of something better up ahead.

"Believe is very dark, but I'm not a dark person at all," Page explains. "I just lean towards these specific chords and melodies. Melancholy with a little bit of hope."

The Pete Yorn cover "Strange Condition," a simple, spatial arrangement that highlights Page's ability let his vocalists control the direction of a song, and not be driven towards emotional peaks and valleys by just synths and bass. Page uses a similarly subtle approach on "Tell Me Why," featuring the velveteen vocals of Télépopmusik's Angela McCluskey. Elsewhere, Page enlists the talents of Matt Alber on "Agnus Dei" and Gabriel & Dresden alum Jan Burton on "Traces Remain" and the raucous "I've Had Friends." On the moody "In The Dark," Page himself takes a turn on the mic at the urging of another G&D contributor, Molly Bancroft, who was initially tapped to provide the vocals. For Page, it was simply the next logical progression in his maturation as a producer.

"I want to work with singer/songwriters who have depth to their lyrics, and I'm trying to bring influences in from other genres," says Page. "It's tragic to see all the tracks on Beatport that are just made for clubs. They're great for what they are, but it's not necessarily something you want to have in your car on repeat, or listen to again in 10 years. This album is really a reflection of myself, and I want these songs to last a long time."

with local support from:

The Purchase of a Resolution NYE 2011 Vip ticket receives