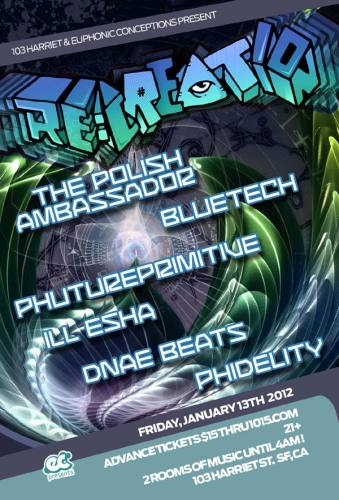 plus much much more TBA !!


if you are interested in painting, performing, or participating in promoting please email us at ECPRESENTS@GMAIL.COM

The Polish Ambassador is a beat machine from the future. Hailing simultaneously from the far reaches of other dimensional Universes and... Oakland, California, this dude drops his own unique blend of electro-funked, glitch-tweaked, wobble-freaked breakbeats that will have you dropping that bottom like it was 92.....3092, that is.

Love songs to the source is the name of the latest album from the adept and on-the-move producer/remixer Bluetech (aka Evan Bartholomew & Evan Marc). After a steady stream of releases on the Waveform, Aleph Zero, thoughtless music and Somnia labels over the last seven years, the next phase of Bluetech’s sonic trajectory plots new and intrepid coordinates via canadian imprint interchill. in this unique full length release, listeners familiar with the bluetech sound are presented with an inviting point of departure into the warm, spacious realms of his signature mid and downtempo electronica.

Employing a more dub-wise and organic sound palette than on previous albums, Bluetech brought several collaborators on board in the making of love songs to the source including; featured vocal contributions from the likes of Dr. Israel, Katrina Blackstone, Mari Boine, Lady K, Tina Malia and Lynx; and musical input from Jamie Janover, Kilowatts and members of the march fourth marching band’s horn section. rounded out with a distinguished selection of instrumentals, this innovative, genre-bending chapter in the evolving bluetech chronicles is ripe with emotive vistas, reflective passages and all the evocative depth that one has come to expect of this highly talented us based producer.

For over a decade, ill-esha has been an integral part of the North American electronic scene. Beginning as a vocalist, she soon added MCing and DJing to her repertoire, creating a dynamic and unique live show which has headlined alongside artists such as Andy C, Klute, Dieselboy, Vibesquad, LTJ Bukem, Tipper, T-Power & De La Soul. She has performed across North America, Europe and Asia; in clubs, at festivals, and even on TV shows on MTV Canada and the CBC.

In 2001 her first 12” single was released on New York label Breakbeat Science; since then ill-esha has worked steadily as a producer and vocalist on labels like Dub Police, Haunted Audio, Simplify & Muti Music; hitting #1 singles download on Juno and commanding six spots of the top ten in the inaugural Beatport Glitch Hop charts. One of the founding members of the premier online community GlitchHopForum.com, her remixes are hugely popular, popping up in DJ sets across the globe. Her show is a fiery combination of original beats, glitch edits and live vocals, not to be missed!

Phutureprimitive music is singular and unique in its approach: Lush melodies drift across intricate rhythms, groove heavy beats and warm, fuzzy bass lines. Often exploring a dark and dense palette, his music also manages to convey a sense of tranquility and beauty, engaging the listener into hypnotic movement and often escalating toward a full kinetic experience. Conceived and produced in a digital environment, his music manages to convey more humanity and organic warmth then typically found in an often cold and sterile genre. Shimmering with cinematic qualities, his music ultimately speaks to both the mind and the body.

San Francisco-based producer, composer and blap pioneer DNAEBEATS creates soundscapes that travel through genre after genre. After years of childhood classical performances around The world he knew that music was his calling. While on tour in Europe he first heard hip hop and electronic music from a tour manager who played him cassettes of Aphex Twin and Digable Planets. Both albums blew DNAE’s mind in completely different directions, and at that moment he knew his path in life was to make electronic music.

"DNAEBEATS is a SF-centered artist who splices multiple genres into a mutant sound all his own. His much heralded mix tape There's a Wormhole in my Bathroom is aptly-titled and must-download. As an accomplished hip hop beat maker (working with the likes of Gift of Gab) and a producer in his own right, DNAE seamlessly weaves together hyphy, dubstep, electro and experimental into a sonic fabric that sounds like it was teleported through a tear in the time-space continuum." -San Francisco Examiner 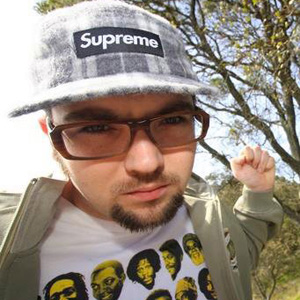