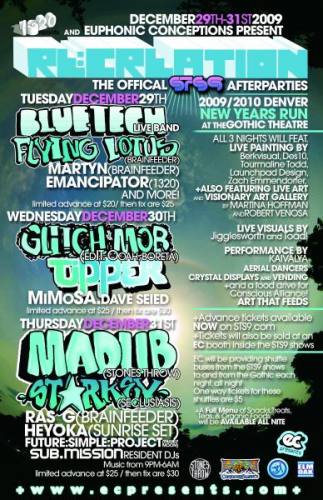 When STS9 announced they were playing three nights in Denver for New Years, it almost went without saying that EC was going to put together three massive till-daylight after parties.
The lineups for these were just announced, and they are:
DECEMBER 29th
BLUETECH (Live Band)
Flying Lotus
Emancipator
Martyn
DECEMBER 30th
The GLITCH MOB (edIT, Ooah, Boreta)
Tipper
Mimosa
Dave Seied
DECEMBER 31st
MADLIB (Stones Throw)
Starkey (Seclusiasis)
Heyoka (Sunrise Set)
Ras G (Brainfeeder)
Future:Simple (Family Moons)
Sub.Mission Resident DJ's
All three nights are at the Gothic, and 3 day passes are available now on STS9.com for only $60.
All three nights will feature a special visionary art galley presented by Martina Hoffman and Robert Venosa!
There will also be a massive gathering of live painters headed up by Des10, Berkvisual, Tourmaline Todd and Launchpad, incredible projection visuals by Jigglesworth and Toad, Kaivalya hoopers, performers, and aerial dancers, and much more!
EC will be making available shuttle buses from the STS9 shows to the Gothic and back. One way tickets for these shuttle buses will be $5.
Many more details are coming soon - stay tuned!