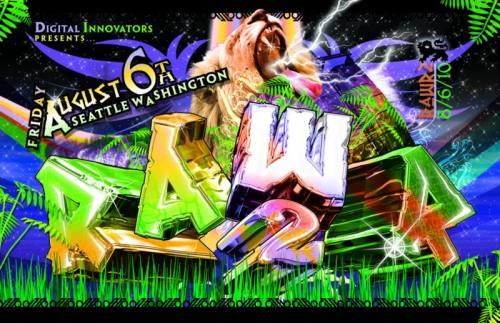 On Friday August 6th Digital Innovators Celebrates the Summer and Carl's Birthday ONCE AGAIN!!!
AZAX SYNDROM
Israel
Boa Group // Drive Records
http://www.myspace.com/azax
AZAX SYNDROM IS REGEV AZARIA FROM ISRAEL. HIS MUSICAL BACKGROUND IS HEAVY METAL, IN THE EARLY 90'S AZAX WAS A LEAD SINGER IN A DEATH METAL BAND. THEN IN 1994 AZAX WAS EXPOSED TO PSYTRANCE THROUGH SOME FRIENDS, AND WAS AMAZED BY ITS MAGICAL POWER. SINCE THEN HE WAS COLLECTING AND PLAYING TRANCE MUSIC,AND AFTER BEING A DJ FOR SOME YEARS HE STARTED TO MAKE HIS OWN MUSIC AT THE BEGINING OF 2002. COMBINING HIS MUSICALY BACKGROUND WITH HIS TRANCE INFLUENCES, HIS TRACKS ARE VERY POWERFULL ALLWAYS PUSHING TO THE MAX. SINCE THEN AZAX HAD MANY RELEASES ON VARIOUS LABELS, GETTING A BIG NAME FOR HIS UNIQUE MUSIC AND STYLE. ALSO COLABORATED WITH MANY ASRTISTS SUCH AS: SKAZI, PSYSEX, ABSOLUM, CPU, DIGITAL TALK, PAINKILLER, BLISS, SPACETRIBE, ABOMINATION AND MANY MORE... AZAX DEBUT ALBUM "EVOLUTION" RELEASED AT APRIL 2007 AT 3D VISION RECORDS, AND WAS A BIG HIT ON DANCEFLOORS WORLD WIDE ... LATER HE RELASED HIS COMPILATION " THE EXPLODING MAN", FEATURED 10 MASSIVE TRACKS, MEGA BLASTERS,SHAPING THE NEW SOUND OF PSYCHEDELIC MUSIC. MORE NEWS COMING SOON!
Download the amazing mix here!!!
http://www.drive-records.com/ROUND1/
Preston Young
Los Angeles
www.di.fm // Digital Innovators // The Underground Heroes // Mad Cow
http://elementsofhardtrance.com/
http://www.facebook.com/djprestonyoung
Preston Young was born and raised in Seattle, WA but moved to Los Angeles, CA. He hosts a monthly online radio show called Elements Of Hard Trance on DigitallyImported.com. He plays Hard Trance at raves and Progressive House and Techno at clubs. Preston has great stage presence and strives to keep his sets interesting with driving beats, heavy basslines, and emotional melodies.
Magnus
A Maryland native, Magnus has called Seattle, Washington home for the past 9 years. He began his career in 2002 by playing out around the area at club events and parties under the DJ name of “Magnus”. Magnus’s tracks have ranked in the top 10 psytrance chart on Beatport and have been played on A State of Trance, Future Sound of Egypt, Rush Hour, Global Trance Grooves, and many more.
In addition to 13 releases between his Magnus and Michael Lee aliases on such labels as Discover, Pharmacy, JOOF, and Audacious, Magnus also has tracks appearing on CD compilations by Ministry of Sound and Moist Music. Also producing frequently under his "Michael Lee" alias, Magnus has had several Michael Lee releases to date. Most recently, Magnus had a Michael Lee release on Discover entitled Everblue with a remix by Adam Foley which was has been supported and played by Armin Van Buuren on A State of Trance episode 438. Gaining further momentum, Magnus’s greatest accomplishment to date was winning the Sean Tyas Melbourne remix competition in 2009, beating out over 200 other contestants.
Magnus's style is somewhat of a crossover between trance and psytrance, incorporating characteristics of each into his music. His style uses grindy, acidic synths and basslines that forge together to produce an energetic and uplifting sound. His tracks have been played and supported around the world by Armin Van Buuren, Sean Tyas, John Askew, Aly and Fila, Christopher Lawrence, and John Fleming. Magnus’s most recent release of First Born/Final Resolve on JOOF Recordings has been a huge global success. With several releases on both Pharmacy and JOOF coming in the months ahead, 2010 will be a big year for Magnus. A 2010 artist album is also in the works for JOOF Recordings.
For more information:
Magnus - www.myspace.com/ioncommander
Michael Lee – www.djmichaellee.com
CHANNEL SMURFER
Digital Innovators // Televisionary
http://www.myspace.com/channelsmurf
Channel Surfer
Televisionary // Digital Innovators
http://www.myspace.com/channelsmurf
Wheelz
Smokeshack // Marble // Tap Tap
http://www.myspace.com/djwheelz
DJ Monkey
Phase 3 // Frequency 8
http://www.myspace.com/saru
twitter.com/djmonkeysaettle
Coral
Touch Samadhi
www.myspace.com/coralslater
Soulkid
i11even Eleven Records // Next Level // BazSic Elementz
http://www.myspace.com/soulkid
Just One
Harvard $t Mafia // Shift // OlyBass
www.harvardstmafia.com
Soundwave
Smokeshack
MBM
D&B Tuesdays // SOMA // Nalij
Nefarious
Housewreckin // Tap Tap
http://www.myspace.com/nefarious10
Zack Attack!!
Digital Innovators // Pussycat Productions
www.myspace.com/zackattack206
Kabiyo
Beat Affinity
http://www.myspace.com/kabiyo
Jesse Newman
Beat Affinity
Jae
Webbwerx
Steep
Oly Music
Hogan64
Televisionary // Jelly Bean Productions PDX
Bugz
All Around Productions
www.myspace.com/ian_1_sk8boarding
Location: Studio 7 110 Horton St Seattle Wa
9p - 4a
People Allowed In: All persons who are respectful and courteous to there fellow partier and staff of the event and venue. All ages