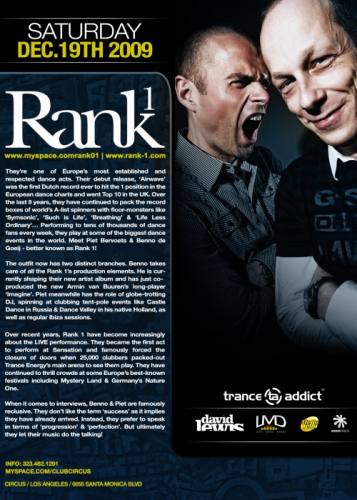 What: RANK-1 AT CIRCUS DISCO

Artists:
Rank 1
Gil LA
Jim Carson
Additional Information:
They’re one of Europe’s most established and respected dance acts. Their debut release, ‘Airwave’ was the first Dutch record ever to hit the 1 position in the European dance charts and went Top 10 in the UK. Over the last 8 years, they have continued to pack the record boxes of world’s A-list spinners with floor-monsters like ‘Symsonic’, ‘Such is Life’, ‘Breathing’ & ‘Life Less Ordinary’… Performing to tens of thousands of dance fans every week, they play at some of the biggest dance events in the world. Meet Piet Bervoets & Benno de Goeij - better known as Rank 1!
Piet’s production career started in 1995, when he banded together with another producer Carlo Resoort to produce the proto tech-trance hit, ‘The Silmarillia’. He went on to create the massively infectious ‘Instant Moments’ in 1997 under the pseudonym R.O.O.S. Benno meanwhile collaborated with the at-the-time unknown Tiësto as Kamaya Painters, producing the scene-setting trance classic, ‘Endless Wave’. He was also behind the pan-European hit, ‘Deadline’ under the name Dutch Force.
A chance meeting at a party in the spring of 1997 set Piet & Benno down the road to Rank 1. Introduced by a mutual friend, they spent the entire night discussing their passion for electronic music. Whilst Benno had no formal production training, Piet saw that his classical music background had given him a natural ear for perfect melodies and powerful riffs.
This was quickly born out by their debut collaboration… As the Dutch trance tidal wave began to rise over Europe, the pair found themselves perfectly positioned to ride it. Championed by fellow Netherlanders Armin van Buuren, Tiësto and Ferry Corsten, the stadium-sized sound of ‘Airwave’ exploded across the continent in 1999. By the following year the track had been released in over 40 countries around the world and cemented the duo’s place in Trance music’s hall of fame. 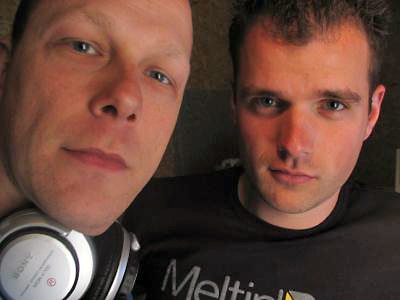