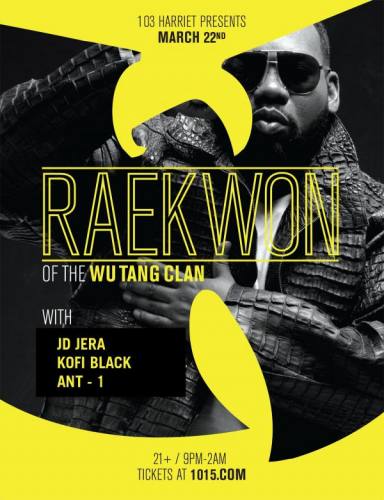 What: Raekwon (of The Wu-Tang Clan)

Corey Woods aka Raekwon The Chef, has been a staple in the Entertainment industry since his debut in 1993 as an integral part in undeniably one of the greatest Hip-Hop groups to date, the legendary Wu-Tang Clan. Rae's verbal ability took center stage early in the original cult classic Protect Ya Neck, but little did the world know, that we were merely indulging in delicious appetizers delivered by Rae. It wasn't until 1995, when Raekwon The Chef emerged from the kitchen and invited the Hip-Hop faithful into his personal chamber and the world was privileged to partake in the perfectly sautéed full course meal… Only Built 4 Cuban Linx.

Critics and fans alike unanimously agreed, Cuban Linx was an instant classic. An opulent sonic journey defined by Raekwon's cinematic narratives and narcotized hooks. The production delivered by Wu Tang's Abbot, The Rza, was simply supreme – his best comprehensive work to date. And never had a co-star been so illustrious: Cuban Linx also managed to showcase the talents of then under represented Wu-Tang band mate, Ghostface Killah. This was also the beginning of the "Rae and Ghost" collaborations which have yielded some of hip hop's most beloved songs.

With a renewal rarely seen in the music industry, Raekwon has experienced a career resurgence few have ever witnessed. With an ever-growing fan base, Rae’s music has managed to place him back on the forefront of Hip Hop’s elite. Having been featured on countless features in 2010, Rae has lent his talents to fellow musicians: Kanye West, Bun B, Fat Joe, Justin Beiber and participated with is Wu Brothers, Ghostface and Method Man in the highly anticipated, Wu Massacre.