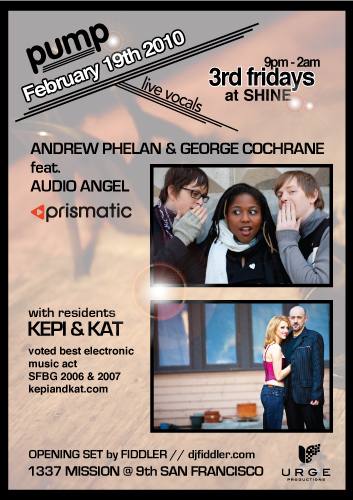 Friday, February 19th
Kepi & Kat, in association with Prismatic present a night of DJs and live vocalists bringing the sweet sound of house music and so much more to your ears:
PUMP @ Shine
With music by:
Andrew Phelan & George Cochrane feat. Audio Angel
Kepi feat. Kat
Fiddler
Free before 10:30, $5 after with RSVP, email news@prismatictracks.com or visit:
http://www.prismatictracks.com/guestlist.php
Shine
1337 Mission St. @ 9th
--
About the artists:
Andrew Phelan & George Cochrane
From a tiny 2nd-floor studio overlooking a gritty alley in San Francisco’s Moulton Studios complex, Andrew Phelan and George Cochrane (aka Origami) have made a serious dent in the international house community. Their sound is a schizophrenic blend of funk, tech, deep and electro, all tied to a core of live instruments and deceptively catchy vocals. Tapped often for their transformative, scene-stealing remix work, they also play well with others, laying tracks with vocalists like Brown and Audio Angel, and moonlighting in maximal-electro foursome The Fingermonsters.
Beyond their extensive body of work on Andrew’s Prismatic Tracks imprint, the duo have releases out and upcoming on labels including Amenti, Body Rhythm, Bounce House, Chillin, Drop Music, Eight-Tracks, Lingo, Lost My Dog, Onethirty, So Sound and Yerba Buena Discos. This work has garnered them praise in DJ Mag, Urb, iDJ and DMC Update, as well as landing them on the charts and playlists of Radio 1, Kiss FM, Mark Farina, Jay-J, Laurent Garnier, Inland Knights, Funk D’Void, Luke Solomon, Colette, Robert Owens, Roger Sanchez and DJ Heather, to name but a few.
Audio Angel
One of San Francisco’s most diversely talented vocalists, Audio Angel’s voiceover work has been heard in a variety of cartoons, commericials, and video games over the years. Most known locally for her work in the Drum & Bass scene, Audio Angel’s beautiful vocals are a perfect fit for Shine. Get ready to experience the skills of a true true diva behind the mic!
Kepi & Kat
A staple in the West Coast dance club and outdoor-festival scene for 6 years running, Kepi and Kat have headlined in the biggest clubs around the country in such places as San Francisco, Los Angeles, Miami, Seattle, and Portland and performed at numerous high-profile outdoor festivals such as the Love Parade (now LoveFest) in San Francisco, LA's cult-favorite Moontribe, and Nevada’s now legendary Burning Man Festival. Now, their fans have spoken and voted the duo "Best Electronic Music Act" in the Bay Area for 2007 and 2006!!
About | Advertise | Contact | FAQs | Terms of Use | Privacy Policy | Accessibility Policy © 2022 - TheUntz.com. All rights reserved.